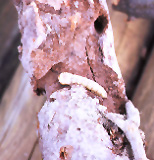 III. Description: The adults of these species are large longhorned beetle, dark brown to almost black. Both species possess three tooth-like projections on each side of the pronotum. The broadnecked prionus ranges from 9/10 - 1-7/10 inch (22-44 mm). There are 10 antennal segments; the male antennae are as long as the body in the male, half as long as the body in the female. The tilehorned prionus is somewhat larger, 9/10 - 2 inches (24-50 mm) long. There are 15-20 antennal segments in this species. Tilehorned prionus larvae reach lengths of 2-1/2 - 3 inches (65-80 mm) (Plate 80). They have a heavy-bodied, cylindrical appearance. Their bodies are white to pale yellow. Heads are small and brown. Legs are so small that they may be overlooked. Eggs are about 3/16 inch (0.5 cm) long, and yellow-brown in color.

IV. Biology: Most information regarding biology results from research on borers on pecan in Georgia. Tilehorned prionus infests roots, larvae feeding on roots for 3-5 years before pupating. In early May (Georgia) mature larvae rise to within 8-12 inches (20-30 cm) of surface, make compact cell of earth and wood particles, and pupate.

Broadnecked prionus has been reported damaging apple roots in Rhode Island. Its range is eastern U.S., into Oklahoma. Adults may be collected on lawns, etc., near oak. Adults appear in mid-June, and are found through the first week of August (peaking in mid July). Adults emerge from the soil in the early evening. They are nocturnal, spending the day hiding under debris and organic matter. The sex ratio is about six females per male. Adults probably do not feed; the digestive tract is atrophied. In the lab, adult females live about 7 days, males about 5 days. Females lay about 400 eggs (possibly more), most 1/2 - 1-1/2 inch (1.3-3.8 cm) deep, some on the surface. Eggs are occasionally laid singly, often in clusters, at a depth of 1/2 - 1 1/2 inch (1.3-3.8 cm). Most egg laying activity takes place in July.

Larvae first feed on the root surface; as they grow they begin to enter the roots, hollowing or girdling them. During the summer, larvae feed at depths around 6 - 18 inches (15-45 cm); in the winter they descend to about 31 inches (80 cm). Pupation takes place in the final spring; the pupal stage lasts about 3 months.

V. Injury: A gradual decline and tree death results from young larvae feeding on root bark and older larvae tunneling into the roots. Damaged roots exhibit deep, sharply defined channeling and tunneling (Plate 80). Affected trees often have a very sparse canopy. Roots may be removed to such an extent that trees may be pushed out of the ground by hand. In one mountainous orchard block pushed out in Virginia, 80% of the trees had roots damaged by Prionus.

VI. Monitoring: If trees are declining, especially in mountainous terrain, dig around crowns of trees with a hand trowel. Large larvae may be exposed. If trees are pushed out, extensive channeling may be seen. No thresholds are currently available.  Control is difficult.  It is currently impossible to control established borers. Sprays of endosulfan, imidacloprid or permethrin are recommended for other cerambycids and are the best tools to use for Prionus (see p. 101 of the ornamental PMG.  Sprays should be directed at the trunk near the ground line in early June, early July and early August (the early July spray is the most important).


This is taken primarily from a chapter by D.G. Pfeiffer, L.A. Hull, D.J. Biddinger, & J.C. Killian on apple indirect pests, reprinted with permission from Mid-Atlantic Orchard Monitoring Guide, published by NRAES, 152 Riley-Robb Hall, Ithaca, New York 14853-5701. Prionus is also discussed in a New York link. See also link for photo of an adult Prionus sp. Back to Virginia Apple Page Back to Home Page for "Arthropod Management in Fruit Crops" course Back to Virginia Fruit Page