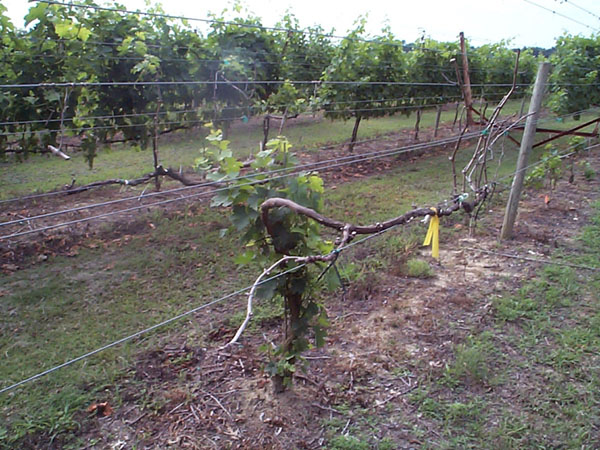 Pierce's disease is a bacterial disease of grapevines spread mainly by several species of sharpshooters. This is a group of xylem-feeding leafhoppers (many spittle bugs (Cercopidae; also xylem feeders) can also transmit the disease). Though not reported to be widespread in Virginia, it is reported from the extreme eastern part of the state (e.g. the Eastern Shore (Delmarva Peninsula) and Tidewater area).  The causal agent is Xylella fastidiosa Wells et al. This bacterium occurs in many monocots and dicots, and is common in many grasses and sedges that are the usual hosts of many of the sharpshooter vectors. While many plant species can harbor X. fastidiosa populations, not all support populations high enough to allow infection.  The xylem vessels of infected grapevines become plugged. Symptoms vary with cultivar. Vinifera vines are more susceptible than native American grapes (although labrusca vines are more susceptible than other American species, such as aestivalis and rotundifolia). Among vinifera varieties, Chardonnay and Pinot noir are highly susceptible, Riesling and Chenin blanc are less susceptible, and Cabernet sauvignon, Merlot, and Sauvignon blanc are moderate in susceptibility. Recent positive findings have been made in north central North Carolina.

Risk has been related to the number of cold nights during winter, which limits bacterial populations within vines.  The greatest risk for Pierce's exists when there are fewer than 3 nights with minimum temperature below 9.4 C (15 F).

The earlier in the season that infection takes place, and the younger the vine, the more severe the infection. Spring inoculations (April-May) are more likely to result in chronic infections; later infections remain localized.  Bacterial populations grow within grape vines, and become high enough to infect sharpshooters only in June-July, so vine-to-vine infection occurs only in summer.  But infections this late are less likely to become chronic.  Symptoms become more severe under drought and other stress conditions. Chlorotic spots develop, followed by dessication starting near leaf edges. Leaves eventually dry totally and abscise. Green spots will remain on cane bark surrounded by otherwise normally mature, dark tissue. Budbreak may be delayed, and shoot growth reduced. On new shoots, the first 4-6 leaves may have veins that are dark green against a chlorotic blade. May of these symptoms are very general; one symptom that is more diagnostic is the abscission of leaves leaving the petiole behind on the shoot.  The time preceding vine death varies with cultivar, age of infection, and climate, varying from 1 year to more than 5 years (Symptoms from Goheen & Hopkins 1988). Some of these symptoms are fairly generalized; diagnosis should be confirmed by lab testing (see Agdia sample submission information).

The disease has been present in California for many years, where the most efficient vector is the blue-green sharpshooter (UCal Irvine link), Graphocephala atropunctata. Other vector species have included the green sharpshooter, Draeculacephala minerva and the red-headed sharpshooter, Carneocephala fulgida. Recently, another species has moved into southern California, the glassy-winged sharpshooter, Homalodisca coagulata (Say). This is a much more important vector. While blue-green sharpshooter feeds more distally on shoots, and the disease may be partially controlled by vigorous pruning, GWSS feeds more basally, leading to more systemic infections. It will feed on woody stems, and on wood during the winter.  The GWSS is originally from the southeastern U.S. The distribution in Virginia is unclear. However, Virginia seems to be outside the main range of the species. It was not reported in the leafhopper species list for Virginia by Stearns (1927). Turner and Pollard (1959) reported it only as far north as Fayetteville NC. In Georgia and South Carolina (where it is also the vector of phony peach disease, a disease caused by the same bacterium), it is only collected east of the Fall Line.

Vectors involved in transmission of PD in the northern part of its range in the Southeast are poorly known. Oncometopia orbona (Fabr.) is a known vector, sometimes discussed under its synonym, O. undata (Fabr.) (Nielsen 1968).  The common names blue sharpshooter or broadheaded sharpshooter are used for this species (see image by Taliferro Trope).  This species has been collected as far north as Maryland.  In the deep south, O. orbona overwinters as an adult, moving into orchards in early spring.  In the summer it was found to feed mainly on herbaceous plants in fields, and in the fall moving back to orchards, trees and shrubs.  Two generations and a partial third were produced.  Female sharpshooters sometimes have white deposits on the sides of their wings; these are accumulations of brochosomes, lipid secretions that are used to waterproof eggs.  The female moves the secretions to the wings using her hind legs, and later uses the legs to transfer material to the eggs.  Graphocephala versuta (Say), the versute sharpshooter, (see photos below) has been collected as far north as Virginia (from northern and central Virginia (e.g. Arlington, Alexandria, Leesburg, Petersburg, Virginia near Plummer's Island MD, Smithfield (Isle of Wight Co.)), Maryland, Illinois and Indiana, west to Texas. Adults overwinter, annd in March adults begin to feed on perennial hosts like wild plum and blackberry.  In summer and fall, nymphs and adults feed on herbaceous hosts.  There are four generations (Turner an Pollard 1959).  Nielsen (1968) believed this species to be of less importance in the development of the disease.  In summer 2002, G. versuta, Oncometopia orbona (Fabr.) (both known vectors) were collected in vineyards on the Eastern Shore, as well as Draeculacephala constricta Davidson & DeLong (Pfeiffer unpubl.).  Congeners of known vectors have been collected from the northern through southwestern parts of the state (e.g. Draeculacephala mollipes (Say) and D. minor (Walk.) in Vienna and Blacksburg, Graphocephala coccinea (Forst.) (UMN photo) in Falls Church, Blacksburg).

The ecology of the disease in complicated. In California, the disease mostly invades from nearby weedy hosts, so infections are more common at the edges of vineyards.  In the southeast, it is more likely to move from vine to vine. Insecticidal control of vectors has not been very effective. However, recent work in Georgia has shown that two drench applications of imidacloprid may prolong vineyard life somewhat (Krewer et al. 2002). California sharpshooter recommendations.