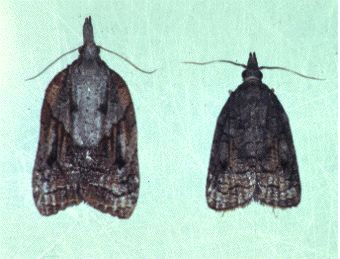 I. Introduction: The tufted apple bud moth (TABM) is probably the most serious direct pest of apples in the mid-Atlantic region. Although this pest can be found in most commercial orchards, those orchards located in intensive production areas are usually more seriously affected. This has been primarily due to the increased insecticide selection pressure which has resulted in the development of resistance to the organophosphate insecticides.

II. Hosts: The major hosts of the TABM include: apple, pear, peach, nectarine, cherry and a wide range of herbaceous plants found in the ground cover.

III. Description: The adult female moth is approximately 1/2 inch (13 mm) long, with the males being slightly smaller. The moths are inconspicuous in color, varying from a mottled gray to brown (Plate 14). The coloration of the wings is generally one-third grayish at the wing base, with gradually darkening to brown at the wing tips. There is usually a lighter colored margin along the leading edge of the wings. The moth is named after the tufted scales which can be seen as two or three groups on the tops of the wings. The larvae are a light brown to grayish tan with a chestnut brown head capsule, a darker prothoracic shield (hardened area between the head and the body), and a dark stripe down the back of the body. A full grown larva is approximately 3/4 inch (18-20 mm) long (Plate 15). TABM deposit their eggs in a flattened, ovoid, green mass consisting of upwards to 150 eggs (Plate 16). As the egg mass matures it changes from a green to a bronze color and finally to a black-head stage which occurs within 24 hours of hatch (Plate 17). Egg masses usually hatch within 8 to 10 days of being deposited. The egg mass is always deposited on the upper leaf surface.

IV. Biology: TABM produce two generations a year with larvae overwintering as second through fifth instars in larval shelters such as rolled leaves and decaying fruit. These shelters are located beneath trees in apple, cherry, peach, nectarine and pear orchards. The larvae become active in early spring, and complete development on a variety of host plants (e.g., root suckers, dandelion, dock, and wild strawberry). The larvae pupate and begin emerging as adults about the beginning of May. They begin egg-laying anywhere from mid- to late May. The peak hatch period occurs about mid-June First instar larvae disperse by crawling or ballooning (floating in the wind on a strand of silk). First and second instars then feed along a leaf midrib, and, beginning with the third instar, they create shelters by rolling leaves after notching petioles (Plate 18), tying leaves to other leaves or fruit, and by building shelters within fruit clusters. Larvae generally pupate within these shelters, emerge as adults, and begin second brood egg-laying about the beginning of August. Peak egg laying and hatch occur in mid- to late August. Late season second brood larvae (second through fifth instars) drop to the ground during fruit harvest or with leaf fall to overwinter. Larvae are attacked by a number of parasitoids, the most common being an ichneumonid, Exochus atriceps Walsh, and an braconid, Meteorus trachynotus Viereck.

V. Injury: The TABM belongs to a family of moths known as leafrollers, but the leafrolling activity has little economic impact on the fruit grower and little physiological impact on the tree. It is when this insect webs a leaf onto the apple fruit and feeds directly on the fruit that it becomes a pest. This damage appears as tiny holes (early instar feeding), as irregular scarring or channeling of the apple surface (Plate 19), or as an area of rot, generally found around the stem. Rot or corking around the stem occurs usually after the larvae have finished feeding and have pupated. Larvae occasionally enter the apple calyx and feed unnoticed within the seed cavity. Most injury to apples is caused by second brood feeding, although in some years first brood damage can exceed damage caused by the following generation. Injury to fruits destined for fresh markets has a greater economic impact since their cash value is much higher compared to that of processing grade apples. Generally, TABM injury does not reduce the grade of processing apples, but it can affect the rate of fruit drop and storageability of those apples by promoting decay, both of which can have an economic impact on the grower and processor.

Monitoring: Recent research at Penn State University has revealed a relationship between the number of adult male TABM caught in sex pheromone traps in the spring and apple injury at harvest. This relationship was developed from orchards treated with an average of four alternate-row middle sprays applied for each brood (June and August). In order to use this monitoring method, a wing-style sex pheromone trap is needed. Two traps are recommended for every 10 acres (4 hectares) or less of `Delicious' or `Yorking'. Traps should be placed at petal fall, at least 200 yards (185 m) apart and in trees located in the center of the block. They should be attached to a limb at a height of 5-6 ft (1.5-1.8 m) in the outer third of the tree's canopy and in the orchard by May 1. Check traps every day until the first TABM adult is caught, and record this date, after which the traps should be checked once a week. After the first sustained capture of TABM, maintain the above procedures for 3 weeks unless cool temperatures occur which affect male flight. If cool temperatures occur after first trap catch add one additional week of trap capture. At the end of the 3-week period average the number of moths caught in each trap to determine a mean cumulative total per trap for the entire block.

Penn State University researchers also found a relation between the amount of fruit injury caused by larvae of the first generation and the amount of fruit injury at harvest (Table 1). In order to estimate this relationship, growers should select 10 trees of a TABM sensitive cultivar (e.g., `Yorking', `Stayman', Rome Beauty') which are representative of tree size and crop load in the orchard. Examine 100 apples per tree (50 top and 50 bottom) during late July or early August. Then calculate the percentage of apples having TABM injury and use Table 1 to determine the amount of injury to expect from the second generation. If the percentage of first brood injured apples does not equal one of the values in Table 1, it can be inserted into the equation at the bottom of Table 1 and the amount of harvest damage determined. For example, if first brood fruit injury is 3.5%, the amount of harvest injury is 7.4% (7.4% = 2.22 + 1.47X[3.5%]). Figure 5 can be used to find the amount of expected fruit injury for the cumulative total number of moths caught during the sampling period. If the projected fruit injury is too high for intended markets, then a variety of adjustments should be considered to improve the effectiveness of the spray regime [i.e., 1) improve spray coverage by increasing the volume of water used, 2) shorten the spray interval between complete or alternate row (ARM) sprays (e.g., 5 ARM sprays/brood), or 3) increase insecticide rates. If the cumulative trap catch is considerably below an acceptable level of injury, then decrease the number of complete or ARM sprays (e.g. 3 ARM sprays/brood) and/or insecticide rate. If the number of sprays is to be decreased, it is safer to reduce first brood sprays rather than second brood sprays. Similar adjustments can be made if the grower is using first brood fruit injury as an indicator of fruit injury at harvest.

Insecticide applications are timed for the egg hatch period since the young larvae are the most susceptible stage for control. Based on recent work by Penn State University researchers if insecticide applications are needed for first brood control they should be applied at about 10% egg hatch which occurs 530-585 DD and second application at 805-855 DD (base 45 degrees F) from the first sustained trap capture of males in sex pheromone traps. These recommendations are based on applying complete sprays. For growers using the alternate row middle system, applications should commence 50-75 DD earlier, at about 475 DD after first trap capture and then repeated every 7 days for a total of four ARM applications per brood depending upon insect density.

If using Intrepid and SpinTor: for first brood control, these products should be applied as a complete spray at 585-640 DD from biofix (base 45ºF, Table 22), or as two alternate-row-middle applications 7 days apart beginning at 530 DD.  An additional application may be needed (in 14 days for complete, in 7 and 14 days for alternate-row-middle) in high pressure situations.

For second brood control using Intrepid or Entrust, apply as two complete sprays at 2355-2435 and 2665-2740 DD, or as four alternate-row-middle applications, 7 days apart, beginning at 2280 DD after spring brood biofix.

This is taken primarily from a chapter by L. A. Hull, D. G. Pfeiffer & D. J. Biddinger on apple direct pests, reprinted with permission from Mid-Atlantic Orchard Monitoring Guide, published by NRAES, 152 Riley-Robb Hall, Ithaca, New York 14853-5701. Back to Virginia Apple Page Back to Home Page for "Arthropod Management in Fruit Crops" course Back to Virginia Fruit Page