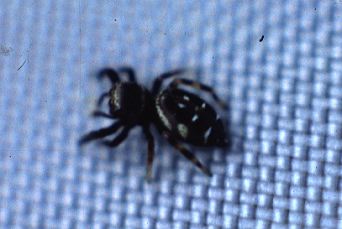 This key is modified from a key by B. J. Kaston (1972. How to Know the Spiders. Wm. C. Brown, Dubuque), including only those groups found in Virginia orchards.

1a. Chelicerae paraxial, i.e., projecting forward horizontally, and with the fang so articulated as to be movable in a plane more or less parallel to the median plane of the body. With two pairs of lungs, visible ventrally on anterior abdomen.........Family ANTRODIAETIDAE
1b. Chelicerae diaxial, i.e., projecting downward or in some cases obliquely downward and forward and with the fangs so articulated as to be movable in a more or less transverse plane. With either two pairs of lungs or more commonly with only one pair of lungs, and either a single median tracheal spiracle, or with a pair of spiracles somewhere between the lung slits and the vase of the anterior spinnerets..........Suborder Labidognatha 2

(2a) 3a. Tarsi with a dorsal row of trichobothria (long, five setae). Eight eyes all light in color..........Family AMAUROBIIDAE
(2a) 3b. Tarsi either without trichobothria, or at most with one. Eight eyes either all dark, or eyes heterogeneous, the anterior medians alone dark; or with only six eyes, the anterior medians lacking..........Family DICTYNIDAE

(9a) 10a. Colulus present (a small appendage resembling a tiny spinneret, located immediately anterior to spinnerets). Hair over body simple and erect. Legs I and II much longer and stouter than III and IV. Claw rufts lacking, or composed of simple hairs, and tarsi I and II not scopulate. Promargin of cheliceral fang furrow unarmed..........Family THOMISIDAE
(9a) 10b. Colulus absent. Hair over body feathery or scaly, and prone. All legs about the same length or leg II alone much longer. Claw tufts composed of spatulate hairs and tarsi I and II scopulate. Promargin with one or two teeth..........Family PHILODROMIDAE

(9b) 11a. Anterior spinnerets conical, contiguous or almost so, and not more heavily sclerotized than the posterior. Eyes homogeneous or almost so (with few exceptions). Endites (mouthparts ventral to mouth opening, opposing chelicerae) without a transverse or oblique depression (except in Micaria)...........Family CLUBIONIDAE
(9b) 11b. Anterior spinnerets cylindrical, longer and more heavily sclerotized than the posterior, and separated by a distance about equal to the diameter of one. Eyes distinctly heterogeneous, the anterior medians alone dark; the posterior medians often oblique, oval or triangular. Endites with an oblique depression (a) on the ventral face..........Family GNAPHOSIDAE

(6b) 12a. Eye group hexagonal, the posterior row procurved, the anterior row recurved, with the clypeus high. (Abdomen pointed behind and legs with very prominent spines..........Family OXYOPIDAE
(6b) 12b. Eye group not forming a hexagon, and clypeus much lower..........13

(12b) 13a. With tarsus IV in most specimens provided for at least one-sixth its length from the distal end with a ventral row of 6 to 10 serrated bristles, forming a comb, which may be poorly developed in males. Spiders hanging in an inverted position in irregular mesh webs..........Family THERIDIIDAE
(12b) 13b. Tarsus IV without such a comb..........14

(14a) 15a. Posterior row of eyes so strongly recurved that it may be considered to form two rows. Median claw smooth or with a single tooth. Anterior piece of lorum rounded behind a fitting into a notch of the posterior piece. Egg sac carried attached to spinnerets and young carried on mother's back..........Family LYCOSIDAE
(14a) 15b. Posterior row of eyes not forming two distinct rows, but only slightly recurved. Median claw with two or three teeth. Egg sac held under cephalothorax; young not carried about by mother..........Family PISAURIDAE

(16a) 17a. Epigastric furrow between lung slits procurved. Rudimentary boss on chelicerae. In most specimens the chelicerae are large and powerful. Femora with trichobothria ..........Family TETRAGNATHIDAE
(16a) 17b. Epigastric furrow nearly straight. Boss conspicuously present on chelicerae in most, though rudimentary in some. Femora without trichobothria, or if present then femur IV provided with a double fringe of hairs on the prolateral surface..........Family ARANEIDAE

(16b) 18a. Tibia of male pedipalp without apophyses (a thick process) (though the tibia may be dilated distally). Palp of female in most species with a claw at the end of the tarsus. Tibia IV in most species with two dorsal spines, or if only one spine is present then there is one short spine on metatarsi I and II..........Family LINYPHIIDAE
(16b) 18b. Tibia of male pedipalp in most species with at least one apophysis. Palp of female without a claw at end of tarsus. Tibia IV with a single dorsal spine or bristle, and with the metatarsi spineless, or all spines lacking altogether..........Family MICRYPHANTIDAE