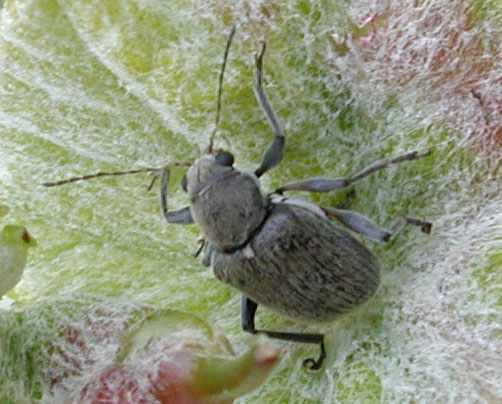 Larvae of this beetle overwinter in the soil among grape roots, from 1-2 cm to more than 50 cm deep. In spring, feeding on roots is resumed. Larvae pupate in cells close to the surface, usually 40-60 cm from vine bases, in late May and June (about the time of grape bloom). Adults appear about two weeks later. Beetles are about 6 mm long, chestnut brown with yellow-white hairs (See New York photo) (older adults look darker in color as the lighter hairs are worn off). Adults feed on foliage for a month or more, making chain-like feeding marks (Photo 1, Photo2) (similar to those made by larval grape flea beetles). Adult feeding on leaves may last for 3-4 weeks.  Females deposit creamy-white egg clusters on canes under loose bark, averaging about 100 eggs per female, with 20-30 eggs per cluster.

Eggs hatch in 1-2 weeks and larvae drop to the ground, enter the soil, and feed on grape roots until cold weather. Larvae consume smaller roots and eat pits into larger ones. This damage is much more important than the adult foliar injury. Vines become unthrifty, reducing yield, and may even die after several years of infestation. If vines are planted in soil poorly suited to grape, any damage by grape rootworm will have a more severe effect. The life cycle takes one to two years for completion. A related species, F. longipes (Melsheimer), the southern grape rootworm, has been found to be more common than F. viticida in North Carolina. Its distribution in Virginia is not known.

Chemical control:  Chemical control is directed toward adults soon after emergence, before oviposition. First and second grape berry moth sprays may control grape rootworm. Timing is important.  If sprays are applied too early, many adults may still be in the soil, and spray residues may not last long enough to give control during the whole adult feeding period.  If applied too late, eggs will already have been laid under loose bark, providing for the next generation of root reeders.  Sevin (carbaryl) has been a common recommendation.  Some early sprays for grape berry moth would also help against grape rootworm (excluding those materials specific for Lepidoptera).  See post bloom and first cover control recommendations.


Cultural control: Pupae may be destroyed by intensive shallow cultivation of soil until adults emerge in late June.