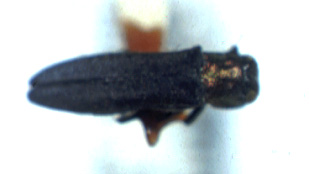 I. Introduction: This buprestid beetle infests wild and cultivated blackberries and raspberries in the eastern states from Canada to the Gulf of Mexico. Adults are about 6-7 mm (1/4 inch) long, with an irridescent coppery pronotum. A related species, Agrilus rubicola Abeille, may occur concurrently. This species is uniform in color, ranging from copper-colored to irridescent green.

On galled plants, there is less live vegetative growth and more dead wood. There is often reduced berry size and number, as well as vegetative growth with increasing number of galls per plant. Affected canes may not produce fruit. Canes weakened by galls are more subject to winter injury.

II. Biology: Adults are present from May to August, or late April to early June, depending on the region. Females lay white spherical eggs on the trunk, and produce a yellow viscous material from the ovipositor which is smoothed over into a covering, before fading to white or grey. Larvae exit the egg directly into the plant, never becoming exposed, and so are impervious to sprays. Young larvae are restricted to the cambium, circling the cane 3-4 times in a close spiral, girdling the primocane, and producing gall-like swellings. As larvae grow, they extend feeding deeper into wood and pith, and staightening the spiral and heading usually toward the distal end of the cane (tunnels may extend 15 cm below to 64 cm above the gall). Larvae reach a length of 12 mm, and have a pair of horn-like projections on the posterior end. The larvae are white and legless, with a flattened head (the family is often called flatheadeded borers). Larvae winter in the cane, and in March create a pupal chamber. The pupa is formed in late April. The pupal period lasts 20-40 days. When the adult leaves the pupal skin, it remains in the tunnel for about 10 days before chewing a D-shaped emergence hole. Adults feed on foliage for several days before beginning oviposition. They are most easily found on the plants on warm sunny days. There is one generation annually.

IV. Control: Chemical control: After leaf fall or during winter pruning, note galls. If more than 10% of the primocanes are infested, or if the number of primocanes expected to be pruned off is exceeded, a spray in justified. Examine primocanes for adults twice weekly, beginning at the beginning of bloom. Damage is minimized when malathion is applied at intervals of 7-12 days from the time the first beetles appear (early to mid May) until early June (last emergence). Often two sprays will suffice, just before bloom and about two weeks later (or the end of bloom, whichever is later). Spray toward the base of canes, avoiding areas with any residual blooms.

Cultural control: Remove galled canes in dormant season or early spring. This is most effective if nearby wild hosts are eliminated, and also more effective in open settings (wild brambles in nearby woods provide a source of wild beetles). Summer pruning also may provide a substantial reduction in rednecked cane borer infestation, since by the time new shoots appear, they have escaped much of the oviposition period of rednecked cane borer.

Biological control: This species is occasionally parasitized by Barichneumon sp. and other species. Mortality may be quite high, but the normal degree of successful biological control is unknown.