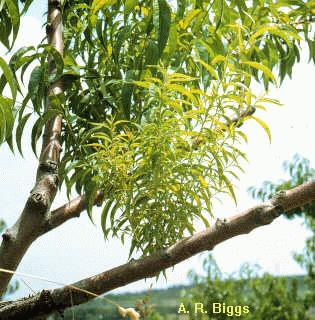 Background of Disease: Peach yellows is a disease caused by a phytoplasma (formerly called mycoplasma-like object (MLO)), a group of organisms similar to viruses, but with characteristics of bacteria as well. It is endemic to the eastern U.S. It may become a problem in peach blocks in years when trees are not sprayed (as in years of crop loss following freeze injury). The natural host of the disease is wild plum, which is asymptomatic. This is also the main host of the leafhopper vector. When trees are not sprayed, some leafhoppers will move to peach, although this is not a preferred host. Unfortunately, while the natural host is asymptomatic, peach is susceptible to expression of the disease of peach yellows. Also vulnerable are nectarine, apricot and Japanese plum. The disease may be transmitted by leafhoppers, also by grafting and budding, and by seed. It is not spread by mechanical means such as pruning. Peach yellows was a major factor in the decline of the peach industry in Delaware between 1890 and 1900. This disease is a quarantine issue in California, Washington State and Oregon. There is a similar disease in Europe.

Symptoms: Symptoms include witches' broom growth (see photo above, courtesy of West Virginia University) and premature ripening of fruit. While fruit develop color early and are large, taste is bitter and quality is inferior. Leaves also unfold earlier than normal. Expression may be confined to one limb, on all limbs except one, or the whole tree. Infected buds may not become fully dormant, and consequently limb tissue may die.

Plum leafhopper has a singe generation annually. It is most common on plum, Prunus americana, and much more rarely on peach and a few other Prunus species. It is found in eastern North America from Quebec and Ontario to Virginia, westward to Ohio, Illinois and Indiana. The range of wild plum extends much farther southward, but peach yellows is present only as far south as the range of plum leafhopper.

Adult plum leafhoppers are dull reddish-brown with indistinct markings. The linked images show the color and rough shape (plum leafhopper top, side and front views; this specimen was collected in 1919 in Vienna, Virginia, and is missing its front wings). Females are larger than males, with a length of 5 mm compared with 4.5 for males. Eggs are laid beneath the bark of plum; this is the overwintering stage. Eggs hatch as plant tissue growth starts in spring. Since nymphs cannot fly, they develop on the overwintering host. The nymphal stage lasts about a month. Adults appeared in mid June in New York, but did not mate until mid July. Adults continue to appear until July, and are present until mid August. Adults and nymphs feed on twigs, and hide behind the twig when approached. Their hiding behavior, combined with a color similar to peach twig bark, make this insect difficult to detect under normal circumstances.

Hartzell (1935) presented the seasonal age distribution of plum leafhopper. The peak of nymphal populations was in late May - early June in New York. Peak adult numbers were found in the last week of June. Since peach trees are vulnerable when poorly sprayed, it might be advantageous to spray peach trees in late May even in years of crop loss. This would coincide with the arrival of adults originating on the preferred native host, wild plum.