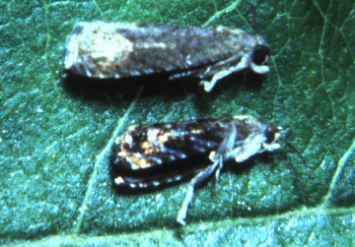 I. Introduction: The lesser appleworm (LAW) is native to eastern North America, but has spread throughout most of Canada and the northern U.S. Although sometimes more abundant in abandoned apple orchards than the CM, this insect has proven to be much more susceptible to insecticides and is generally of minor importance in commercial apple orchards.

II. Hosts: Only the fruits and stems of rosaceous plants are attacked by the LAW. Plum, apple, and cherry fruit are the preferred hosts, but this insect has also been reported infesting the fruits of apricot, pear, and peach as well. In the wild, the LAW is thought to utilize the fruits of hawthorn and native plum species as well as the hips of wild roses.

III. Description: The adults (Plate 35; the lower moth pictured above) are approximately 0.28 inch (7 mm) long and have a wingspan of about 0.43 inch (11 mm). The adults are smaller than the closely related oriental fruit moth and cherry fruitworm. The front wings are dark brown in color with scattered patterns of grayish orange patches and a few thin transverse bands of shining pale blue. The two largest gold areas are found in the middle of the front wing and on top of the head. When the wings are folded in the resting position, these areas form a gold band stretching across the back. The female moth lays between 40-60 eggs.

The eggs are flat oval disks 0.025 x 0.022 inch (0.65 x 0.55 mm) in size. When first laid, the eggs are white, but soon turn a yellowish color. The larvae reach a length of 0.35 inch (9 mm) with a head capsule width of 0.032 inch (0.8 mm) In size and coloring, the larvae are almost indistinguishable from those of the cherry fruitworm and oriental fruit moth (OFM). All three of these species have an anal comb which separates them from codling moth larvae, all are white with reddish-pink tinges, and all have a dark brown head capsule and thoracic shield. The oriental fruit moth tends to be paler in coloration than the other two species but methods suggested in the literature to separate the species by boiling or preserving in special fluids do not always work. The only sure method to distinguish these three species from each other is to rear them to adulthood or note the type of damage they do. The larvae pupate in tightly woven white cocoons and the golden brown pupae are about 0.20 inch (5 mm) in length.

IV. Biology: The biology of the LAW is very similar to that of the CM with adult emergence of each species occurring within a week of each other during both generations. Both species overwinter as full grown larvae in hibernacula in cracks and crevices on the tree trunk, or in the leaf litter below the tree, or occasionally in the calyx end of fallen fruit. The larvae pupate within the hibernacula early in the spring, generally during May, and begin adult emergence 2-3 weeks later with peak emergence by mid-June. The eggs are laid singly on the upper surface of leaves or directly on the young fruit. Upon hatching, the young larvae immediately search for a fruit to on which to feed and begin mining the fruit just beneath the skin, generally near the calyx end. Deep internal feeding by LAW larvae in apple fruit is rare and many reports of this type of injury associated with this moth are due to confusion of their larvae with the very similar OFM larvae. The larvae of the first generation have been reported to bore into the young shoots of apple to feed in the same manner as oriental fruit moth, but this is rare. The first generation larvae complete development by mid- to late-July and may or may not leave the fruit to pupate. The first adults of the second generation begin to emerge by early August and peak emergence generally occurs by mid-August. Adult flight from this generation, however, may continue into October. Larvae of the second generation are often present at harvest and begin to form hibernacula in October.

V. Injury: LAW larvae feed primarily on the fruit at either the calyx or stem ends. Only rarely are the larvae found feeding on the side of the apple. Feeding on the fruit is shallow [<0.24 inch (6 mm) deep] and the injury is in the form of a blotchy mine (Plate 36) similar in shape to the feeding injury caused by the redbanded leafroller. RBLR, however, consume the skin when they feed, but the LAW larvae feed just below the apple skin and do not consume it. There will often be an inconspicuous pile of frass near the feeding site that is characteristic of LAW feeding. Damage from the OFM is much deeper and similar to damage associated with the CM. Conspicuous dark brown frass around the entrance hole is often associated with OFM injury and the larvae with often enter the side of the apple as well as the ends of the apple fruit. Fruit infested during the first generation of LAW generally fall to the ground during June drop, but fruit infested during the second generation will often contain larvae at harvest. 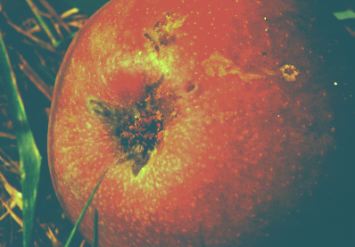 VI. Monitoring: The flight of male adults can be monitored with sex pheromone traps. The commercial LAW pheromone lures, however, often catch significant numbers of the OFM as well due to the similarity in their pheromones. Conversely, LAW males are attracted to OFM traps, although captures will be lower because one component in the OFM pheromone is somewhat inhibitory to LAW. Care must be taken therefore to distinguish the smaller, more brightly colored LAW adults from the larger, slate-gray OFM adults. Pheromone catches may be used to predict various stages of LAW development, but can not be used to predict population size at present. Because of its minor pest status, thresholds have not been developed for this insect.