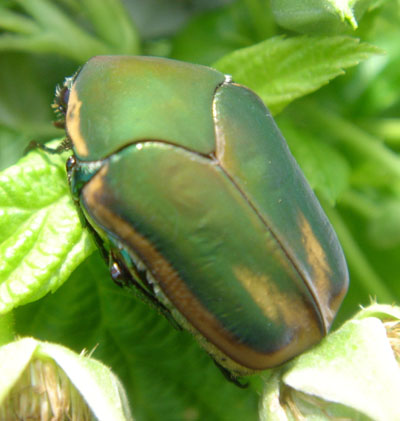 I. Introduction: This relative of the JB has a similar life history and causes similar damage.

II. Hosts: Adult green June beetles (GJB) feed on the foliage of many shrubs and trees and will occasionally attack most tree fruits and berries.

III. Description: The adult is about 1 inch long, 1/2 inch wide (25 x 13 mm), and flat on the top. Beetles are dull velvety green above with deep yellow to bronze margins, and metallic green below (see photo above). Grubs are grayish white and considerably larger than JB grubs. Larvae are white grubs, a little less C-shaped than others (though when disturbed will coil tightly).

IV. Biology: One generation of adults matures each year. Grubs overwinter up to a foot (0.3 m) or more below the soil surface. They gradually make their way close to the surface during the spring, and feed mainly  on decaying plant matter and to a lesser degree on roots.  Larvae may leave their protected sites and crawl on their backs to establish a new site elsewhere.  The grubs pupate by May and adults emerge in early July and August. Eggs are laid in soil with decaying vegetation.

V. Injury: Like JB, adult GJB are responsible for the principal damage to peaches. Beetles feed on petioles, leaves and fruit, and a single adult can cause significant damage. Adults are often found in groups and take large chunks from the fruit. Fruit injury is not as common as that from JB, but does occur when populations are large. Most injury is seen in late July and August, and unlike injury from JB, can occur on both green and ripening fruit.

VI. Monitoring: Traps are available for JB and are somewhat effective for GJB, but are only effective for monitoring the initial adult emergence. Adults may be monitored by quietly moving into the tree, jarring several branches, and observing how many fly off. Direct fruit counts are the most effective way of assessing damage. Fruit should be examined by the method outlined for other insects. Since feeding may be "clumped" or unevenly distributed, care should be taken in looking at a representative sample before making a spray decision. If feeding exceeds 1/2 to 1 percent, then a treatment is justified.