I. Introduction: The codling moth (CM), a native pest of Eurasia introduced into the United States over 200 years ago, now occurs throughout North America as well as most of the world, wherever apples are grown. Presently, the CM is maintained at population levels which do not seriously impact upon apple production in commercial orchards. This is because pesticides sprayed to control other pests also kill CM. However, CM is always present and has been known to infest 95% of the apples in an orchard when control measures were not taken against it. Problems with insecticide resistance are beginning to surface in the western U. S. where the CM has developed resistance to the organophosphate insecticides, primarily azinphosmethyl. Injury from CM and the related oriental fruit moth pose an especially severe problem in processing orchards, relative to fruit destined for fresh use, and this complex has been causing rejection of many truckloads of fruit in recent years.

II. Hosts: The CM attack the fruit directly on a wide range of plants including: apple, pear, quince, hawthorn, and crab apple.

III. Description: The adult female CM is approximately 3/8 inch (10 mm) long and grayish in color. The male is similar (slightly smaller) but with a pencil (a grouping) of hairs located near the wing base. The wing is generally a darker shade of gray near the base, with a dark patch containing coppery scales near the inside wing tip. The adults hold their wings tent-shaped over the body when at rest. The larva has a cream to pinkish body and brown head with dark speckles on the prothoracic shield (collar behind the head). When fully grown, larvae are from 1/2 - 5/8 inch (12.5-16 mm) in overall length. Oriental fruit moth larvae, which can also be found feeding internally in apples, are smaller, lack spots on the prothoracic shield, and have a comb-like structure on the posterior end (This species is described more fully in the peach section). The eggs, laid singly on the fruit or foliage, appear as flat discs slightly ovoid in shape. They are at first translucent. Later, they become reddish, and finally the dark head capsule (commonly called the black head stage), can be seen.

IV. Biology: The CM overwinters as a full-grown larva within a cocoon under leaf litter, loose bark scales, or any other sheltered place it may encounter. Pupation occurs at about first pink, with first flight beginning about full bloom, and peak flight occurring approximately 2-3 weeks after full bloom and lasting until mid to late June. First generation eggs are laid on leaves near fruit or on the fruit and develop in about 8-14 days. The newly hatched larvae bore through the fruit surface (generally the blossom or calyx end) and feed near the surface for a time before boring to the core. The larvae will then feed on the seeds and surrounding flesh until full grown in 3-4 weeks. Larvae then exit the fruit, seek shelter, spin a cocoon and may or may not pupate. Most first generation larvae do pupate, emerge as adults in 2-3 weeks, and produce a second generation beginning in mid July. The majority of this second generation will overwinter as mature larvae. Those first generation larvae that do not pupate enter a quiet phase, overwinter as larvae, and begin producing eggs for first generation larvae the following year. The second generation also has individuals which may pupate and attempt to produce a third generation. This generation does not survive the winter at our latitude and is termed a "suicide" generation. They can, however, inflict additional late season fruit injury. 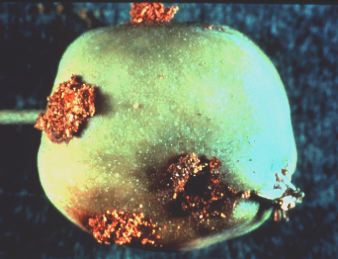 V. Injury: Injury to apple fruit is characterized by either (1) a tunnel emanating from the apple side or calyx and extending to the core, or (2) "stings", small shallow holes the size of a pinprick, with a small amount of dead tissue on the cavity walls. These stings are caused by early instar larvae which have been poisoned and die shortly after puncturing the apple skin. CM larvae that are feeding on the core characteristically have frass (excrement) exuding from the point of entry. Both types of injury will lower the value of the fruit from fresh market to processing grade and in tunneling situations, a cull. There is also the added problem of bacteria and fungi growing on stored fruits which have been injured.

VI. Monitoring: Place pheromone traps for CM in the block by the pink stage, located on the outside of the tree and 6-7 ft (1.8-2.1 m) above the ground. One trap per 5 acres (2 hectares) is recommended. For orchards over 5 acres (2 hectares) in size a minimum of 5 pheromone traps is recommended, one on each of the four sides and one in the middle. Traps should be checked daily until the first adult is caught and then weekly thereafter. Treatments can also be timed with the aid of a degree day model (e.g., Michigan State University PETE Model) which uses degree days to predict adult and egg development. Growers wishing to time sprays based on egg development and hatch should make an application of an insecticide at 250 DD (base 50 degrees F) after the first sustained capture of males in the sex pheromone traps (150 DD if applying a Molt-Accelerating Compound (MAC) such as tebufenozide or methoxyfenozide). A second application can be applied 10-18 days following the initial application if needed.

For the second generation, growers should initiate control at 1100 - 1200 DD (if applying a MAC) or 1250-1300 DD (all other insecticides) after spring biofix, with a follow-up spray in 10-18 days, if needed. For the remainder of the season, control should be initiated if the pheromone trap capture threshold of 5 moths per trap per week is exceeded.

Fruits should be examined between mid-June and early July for evidence of larval entry. Examine 25-50 fruits per tree on 5 trees per block.

In addition to standard organophosphate-based control programs, newer insect growth regulators are available, which are much more ecologically selective, as well as mating disruption.

Codling moth granulovirus is an effective organically acceptable tool to control codling moth.  In southern Germany there have been reports of resistance to one strain of CMGV.  Hear a National Public Radio story from 29 Sep 2007 on this problem.


This is taken primarily from a chapter by L. A. Hull, D. G. Pfeiffer & D. J. Biddinger on apple direct pests, reprinted with permission from Mid-Atlantic Orchard Monitoring Guide, published by NRAES, 152 Riley-Robb Hall, Ithaca, New York 14853-5701.  For additional information, see factsheets from Utah (PDF),
Back to Virginia Apple Page Back to Home Page for "Arthropod Management in Fruit Crops" course Back to Virginia Fruit Page