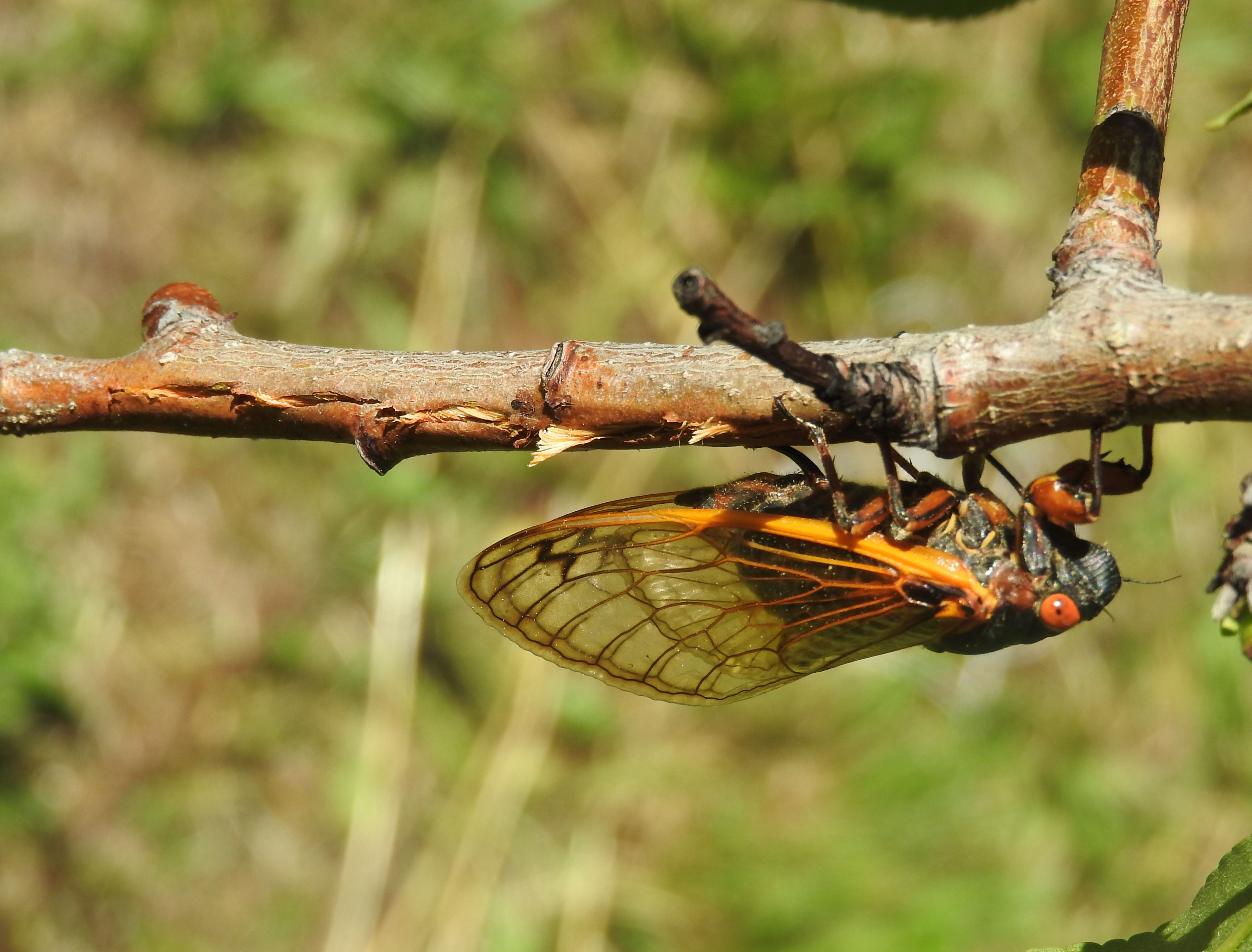 I. Introduction: Periodical cicada will have major outbreaks in Virginia in 2020 and 2021 (Broods IX and X).  This pest complex is well known as emerging every 17 years. There are three broods on 13 year cicadas; the largest, Brood XIX, will appear through much of the Southeast in 2024.  However there are several overlapping broods so that less than 17 years may elapse between appearances. Nevertheless, periodical cicada is a pest that seems to overwhelm the pest management program for short periods, at sporadic intervals.

There were originally 30 broods of periodical cicadas defined by Charles Marlatt, most separated geographically (Broods I-XVII are 17-year species; XVIII-XXX are 13-year species). Not all are large enough to be horticulturally important, and some have gone extinct.  There are now about 15 active broods. Brood X is the most important numerically and geographically; it last appeared in 2004; it will appear again in 2021.  Brood IX is the brood that will appear in 2020 in southwest Virginia and adjacent North Carolina and Tennessee.  Brood XIX (the great southern brood, a 13-year brood), will emerge in 2024.  A map of the yearly occurrence of the various broods in Virginia is given in a Virginia Tech factsheet.  Follow this link for a 20-minute presentation on periodical cicada in Virginia and the Mid-Atlantic region.

Broods appearing in Virginia and nearby states (Click on Brood number for Marlatt's range map):

An alternative way of looking at the broods is in order of next appearance. This may facilitate planning of planting dates for new orchard and vineyard blocks (see Cultural Control below):

II. Hosts: The host range is very broad; almost any tree is attacked except for those that create sufficient gummy exudate to kill nymphs (e.g. pines). Apple is attacked very successfully. Stone fruits may be attacked, especially under heavy population pressure, but are less suitable hosts. Research in Pennsylvania has shown that if the wound is gummed, mortality of the egg mass can result. Gumming increases with the number of attacks per tree.  Grapevines are readily attacked, but only young vines are considered to be at much risk.

III. Description: Adults have black bodies with red eyes and red-orange wing veins. Wings are clear and held tent-like over the body. Antennae appear as small bristles protruding from the head. Adult body length is 3/4 - 1-3/10 inch (19-33 mm), depending on species. Males can be identified by the upturned end of the abdomen and the presence of a tymbal just behind the wings.  Females have a sharpened ovipositor, used for inserting eggs in wood, that is normally kept retracted in a groove along the underside of the abdomen (the ovipositor drops down for oviposition). Nymphs are seldom seen, since they cling to tree roots as they feed, holding the roots with their grasping front legs.

IV. Biology: Periodical cicada spends most of its life as a nymph, feeding on xylem sap from tree roots at a depth of 6-18 inches. In the final year of development, nymphs crawl from the soil, climbing tree trunks or any other structure. During the night, the nymphal skin splits along the midline, and the adult emerges. Thousands of adults and exuviae (shed skins) may be found with each tree in the orchard. Adults appear in mid May (a few individuals may be heard as early as late April in Virginia - first emergence wast noted on April 28, 2021 with Brood X). They appear around sunset, males slightly preceding females. Males form chorusing centers of great aggregations.  The characteristic sound made by males is produced by a membrane called a tymbal, present only in males; this membrane on the side of the first abdominal segment is backed by an air-filled resonating chamber. (note the white structure seen at the front end of the abdomen, just behind the wings in this image).  Sound is made by vibrating the tymbal.   The structure for hearing, the tympana, are present in both sexes; these membranes are tucked beneath protective plates on the underside of the insect.  Singing peaks around 10:00 AM. Adults feed on a wide range of woody plants during the day; such feeding is apparently restricted to the females since the male digestive tract is rudimentary.  Oviposition begins about 2 weeks after emergence.  Females use the ovipositor to make a series of slits in branches, several slits occurring in a row.  Eggs are inserted into twigs in groups of 10-25; the slit into which the eggs are inserted is 1-4 inches (2.5-10 cm) long. Females may lay over 500 eggs. Oviposition peaks in the early afternoon. (See YouTube oviposition clip). 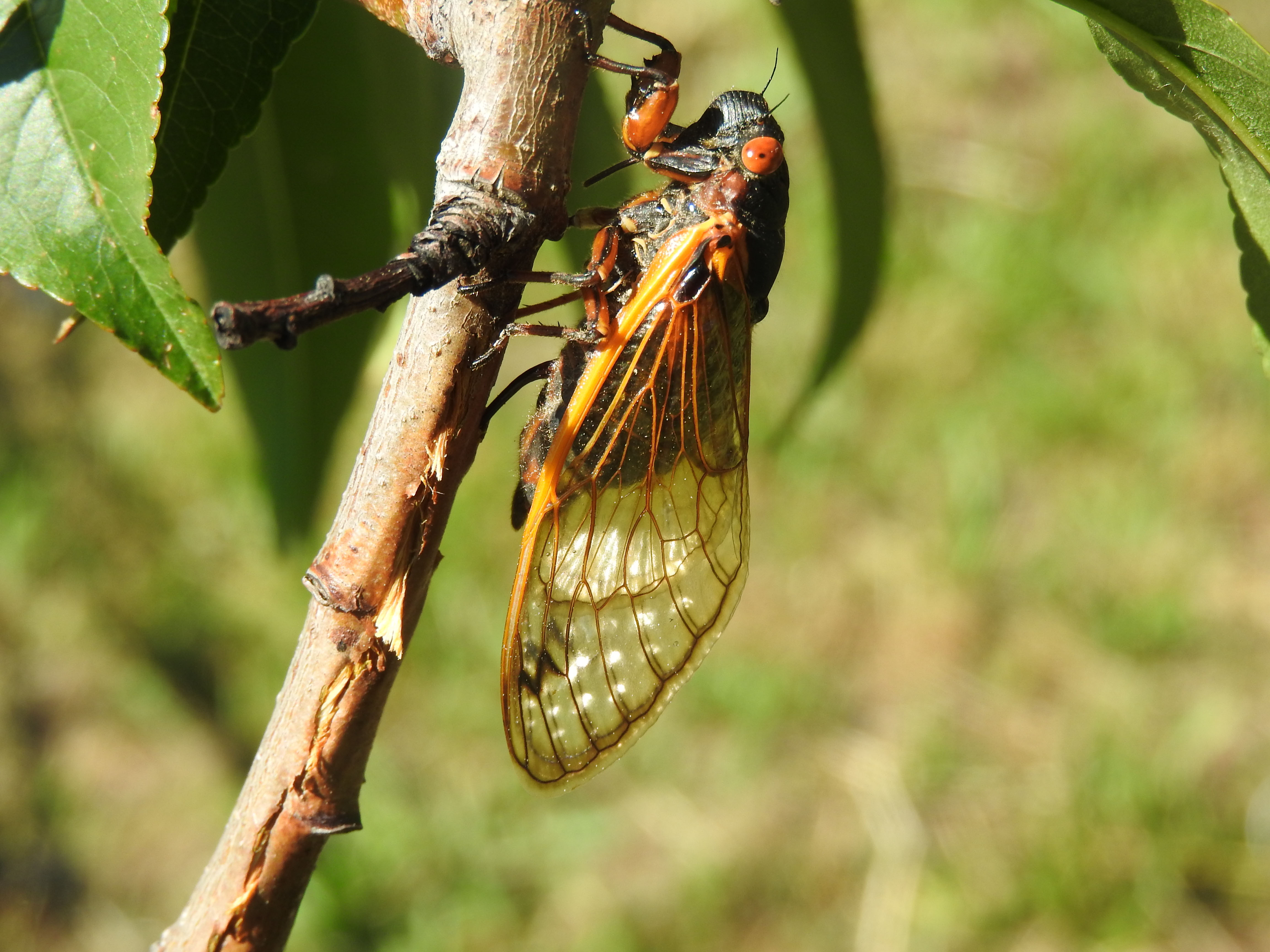 Adults are active for about 6 weeks. Eggs hatch 6-10 weeks after oviposition, whereupon nymphs leave the twigs and drop to the soil. Nymphs tunnel to the roots where they establish themselves for feeding. The most important natural enemies of periodical cicadas in the nymphal stage are moles.  Adults are fed upon by a range of birds, including blackbirds, starlings, robins, blue jays, among others.  Various mammals will feed onadults - dogs and cats, opossums, raccoons, etc.  Eggs are attacked by parasitic wasps and flies and predatory mites. Cicada killer wasps also attack later adults, but these wasps are timed mainly for the later emerging annual cicadas. A fungal disease, Massospora cicadina, infects the adults. However, these natural mortality agents are insufficient to provide control of the massive outbreaks typical of periodical cicada.  Periodical cicadas follow an evolutionary strategy of predator satiation.

V. Injury: The main damage arises from oviposition wounds in twigs. The region distal to the wound dies. This can be very damaging to the structure of the tree, especially in young blocks. There is greater limb breakage during the season on cicada-injured trees. It is worthwhile to delay planting a block if an emergence is expected within one or two years. A second avenue of injury is feeding by the nymphs. A New York study showed that if nymphs were kept from reaching the roots, growth of apple trees was enhanced. Adults may also feed through bark, causing oozing of sap; this is probably of minor importance.  In pear, shoot injury from periodical cicada can provide entry to the fire blight pathogen.  Affected trees as well as neighboring trees may show flagging.

Injury in vineyards, young vines are subject to severe injury, with females using even the trunks as oviposition sites.  (See photo by Lucie Morton).  However even mature vines are subject to significant injury.  If oviposition occurs beyond teh clusters, it may not be severe.  But injury may occur on larger shoots as well, causing wilting and dieback.  Oviposition may occur at multiple sites on one shoot or young trunk; affected areas become weak and will break easily (Eggs in the shoots may be seen on dissection of the injured material). Such young vineyards should be protected.  Aluminum foil or some other physical covering of young trunks has been used successfully.

VI. Monitoring: During springs when adult emergence is expected, watch for the appearance of adults in the orchard. No thresholds are currently available. Treat when aggregations begin to appear in the orchard.

VII. Control:
Cultural control:  It is wise to avoid planting orchard or vineyard blocks within 1-2 years before an expected emergence of periodical cicada.
Mechanical control: Bird netting with a mesh no larger than 1 cm will effectively control injury on branches (Hogmire et al. 1990).
Biological control:  Ineffective because of predator satiation strategy of periodical cicadas.
Chemical control:  Insecticides with rapid action are most effective.  Pyrethroids are the most effective class.  Assail is also effective (neonicotinoids are translocated in the xylem, the same tissue where adult cicadas feed); percent mortality is not as great as with the pyrethroids, but there is less risk of induction of secondary pest outbreaks.  Kaolin clay, an organic option, will provide some reduction in injury.