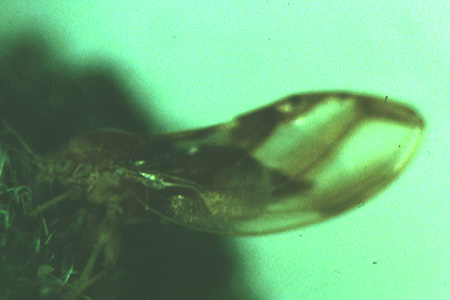 I. Introduction: This species feeds only on blackberry and is very common in the mid-Atlantic region. Psyllids resemble miniature cicadas; they are sucking insects which hold the wings tent-like over the body. The wings of this species are very characteristic; there are three brown stripes running lengthwise. The length to the tip of folded wings is 3.5-4 mm. The general color is yellow to brown. There are elongate triangular projections from the front of the head, that are between 1/2 and 1/3 as long as vertex (top of head). The antennae about 1 1/2 as long as width of head, with dark tips.

II. Biology: This species has a single generation and overwinters in the adult stage. The psyllids overwinter on one of various conifers (Pinus spp., Juniperus spp., Picea spp. and Chamoecyparis spp.). In mid-May (mid-April in Virginia) the adults begin to return to brambles. After adults have been on brambles for 7-10 days, a distortion of the foliage becomes apparent. Eggs are laid from approximately late May to mid July. Females lay between 39 and 202 eggs. The following photograph shows several blackberry psyllid eggs deposited in the folds of a tightly curled blackberry leaf. 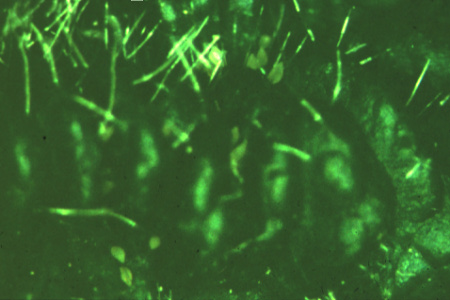 The nymphs are present from early June to late October, and adults began emerging in early October. Nymphs are also responsible for some leaf distortion and may be found inside curled leaves. Nymphs secrete several types of waxy structures. Fruit spurs may be fed upon by blackberry psyllid so that normal fruit fails to develop. In fall, males and females are present in equal numbers but by March, the males have disappeared.

The winter relationship with conifers is apparently obligatory. If blackberries are one mile or more from conifers no psyllid damage will be found. I have collected overwintering adults from various locations in Virginia, West Virginia and Pennsylvania. The ninespotted lady beetle has been recorded as a predator of this species (Caldwell 1938).

III. Control: Malathion when psyllids appear. Avoid sites within 250 yards or so of conifer plantings.