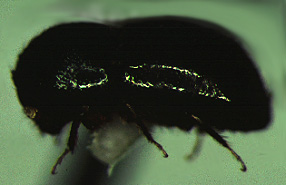 Ambrosia beetles, e.g. Xylosandrus germanus (Blandford), Xyleborinus saxeseni (Ratzeburg) (Coleoptera: Curculionidae: Scolytinae) This group of beetles is apparently increasing in importance in southeastern states and in recent years has caused concern in Virginia by its burrowing activity into grapevines. X. germanus has been introduced into North America from Japan and X. saxeseni from Europe. Ambrosia beetles are in the bark beetle subfamily, Scolytinae, now within the weevil family Curculionidae (formerly in their own family, Scolytidae). Unlike other bark beetles, which make galleries under the subcortical tissue beneath the bark, ambrosia beetles burrow straight into the wood. X. germanus tunnels penetrate straight into the trunk for about 1 cm, then divide into three or more arms. X. saxeseni tunnels likewise proceed straight into the trunk, but the beetle then excavates a long chamber parallel with the grain of the wood. The adult beetles inoculate the tunnel walls with a fungus on which the larvae feed during their development. They do not normally attack dead or healthy wood, but prefer hosts weakened by disease, drought, winter injury, etc. However, some species will more readily attack a healthy host, and most species are able to attack such host plants during population outbreaks.

There are generally two generations per year, although this may vary from one to three depending on temperatures. Adults overwinter in their galleries. Emerging adults fly with the warming of spring, peaking in mid to late April. The vines seem able to repel many of the attacks by copious sap flow from wounds, pushing out the invading beetles.

Adult females are about 2 mm long, brown, and have truncate posterior ends; males are generally smaller. Males are present as a relatively small proportion of the population and never leave their native tunnels; hence they are seldom collected. Tunnels are about 1 mm in diameter and are often marked by sap running down the trunk. The economic importance of ambrosia beetles in Virginia vineyards is not clear at this time. Vines seem able to repel attacks in most cases, and beetles will fail to establish.  A further source of injury may result from the propensity of certain pathogens, e.g., Agrobacterium tumefaciens, the causal agent of crown gall, to invade trunk wounds. The fungus inoculated by the beetles as a food source for the larvae is not known to be pathogenic to the host plant; however, other fungi, such as Fusarium spp., are sometimes introduced accidentally.

An exotic ambrosia beetle that is more likely to attack healthy hosts is the granulate ambrosia beetle (or Asian ambrosia beetle), Xylosandrus crassiusculus (Motschulsky) (NC State fact sheet) introduced into the U.S. in 1974.  This species characteristically produced pencil-like protruding material from its entry hole.  Infested hosts may be removed. Since beetles tend to attack hosts previously attacked by others of the species, it is best to leave plants in place for 30-50 days after the appearance of the "pencils".  Chemical control is difficult, and repeated sprays may be needed.  Timing should be in early April.  See the following web sites relating to this species: Bugwood, North Carolina, Texas,.

If ambrosia beetles are commonly a problem, ethanol traps along the edge every 10 meters, on block sides facing woods, may reduce immigration pressure.
In addition to ambrosia beetles (Scolytidae), a superficially similar family of beetles, in the family Bostrichidae, may tunnel into vine trunks or cordons. Bostrichids generally have a bumpy pronotum (the section behind the head), with the head directed distinctly downward, with straight clubbed antennae.  Scolytids have elbowed clubbed antennae, with the head directed forward or slightly downward, and are usually smaller than bostrichids.  The most important bostrichids in vineyards are:

The grape cane borer, Amphicerus bicaudatus (Say), is a bostrichid beetle that feeds on a variety of trees, including apple, pear, peach, plum, forest and shade trees, and ornamental shrubs. It is also known as the apple twig borer.  A related species, Xylobiops basilaris (Say), has been collected from Virginia vineyards, occasionally causing important injury to canes. This species is sometimes called the redshouldered bostrichid or redshouldered shothole borer. Note the downward projecting head in these BugGuide images (lateral; dorsal); this is typical of the family Bostrichidae.

The adult beetle is about 1 cm long, brown with a cylindrical body. The head is directed downward and a blunt abdomen bears a pair of horn-like projections. Adults overwinter in burrows in wood. They become active early in spring, boring into axils of grape and other plants. Eggs are deposited in May in dying wood. Neither young, vigorous wood nor old, dead, dry wood are suitable for larval development. Larvae develop during the summer and after a pupal stage adults appear in the fall.

The adult feeding is the source of injury to grapes, since larvae feed in dying wood. Young shoots may suddenly break off or die. Near the base of the injured section is a small hole, with a burrow leading into the main stem. The beetle may be found in this burrow. All new growth may be killed in a severe infestation. Dying trees and prunings should be removed from the vicinity of the vineyard.  Trunk sprays of bifenthin at the beginning of tunneling activity may help reduce injury.

The financial support of the Virginia Winegrowers Advisory Board for research on ambrosia beetles in vineyards is gratefully acknowledged.
Back to Virginia Vineyard page Back to Virginia Fruit Page