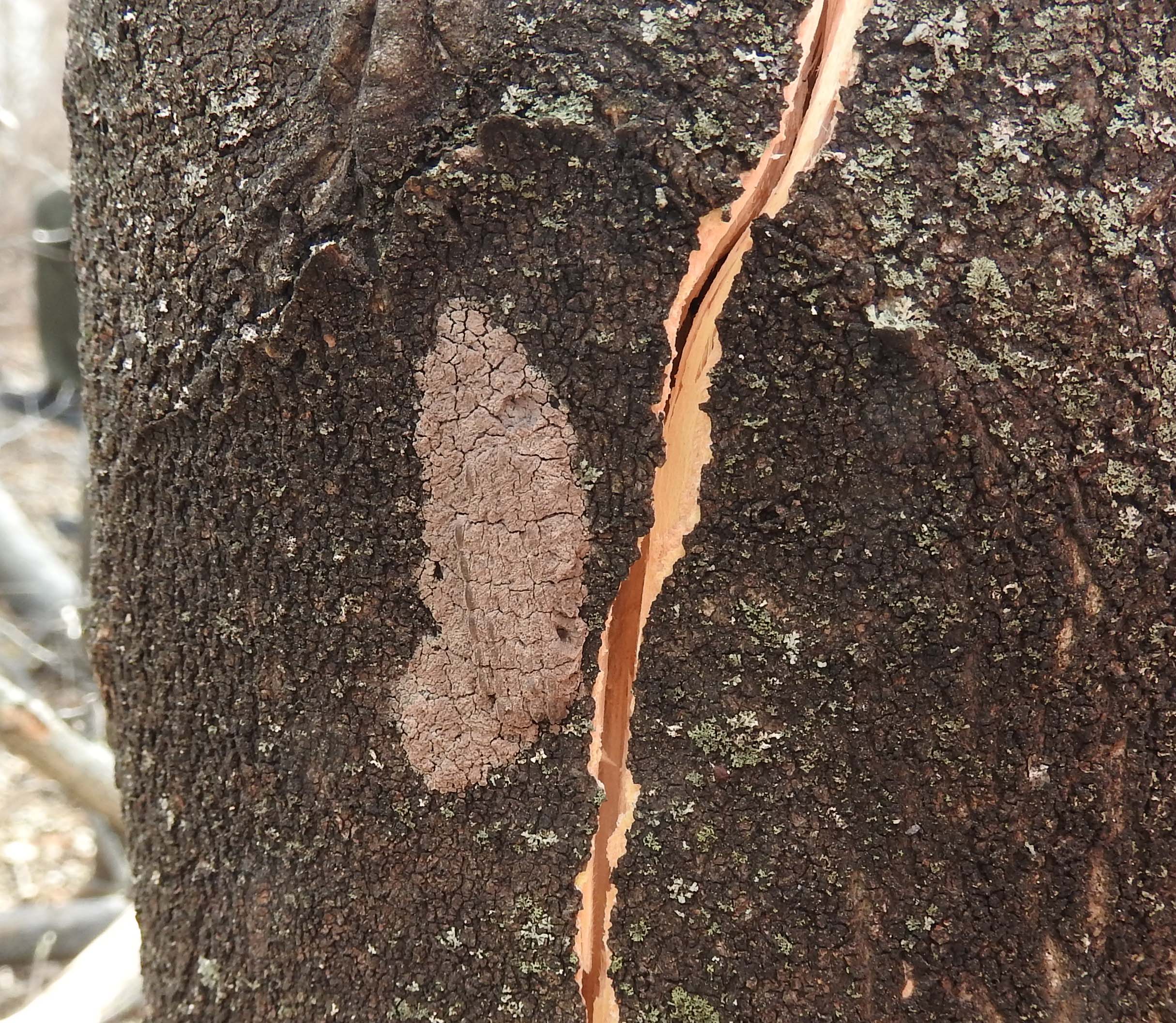 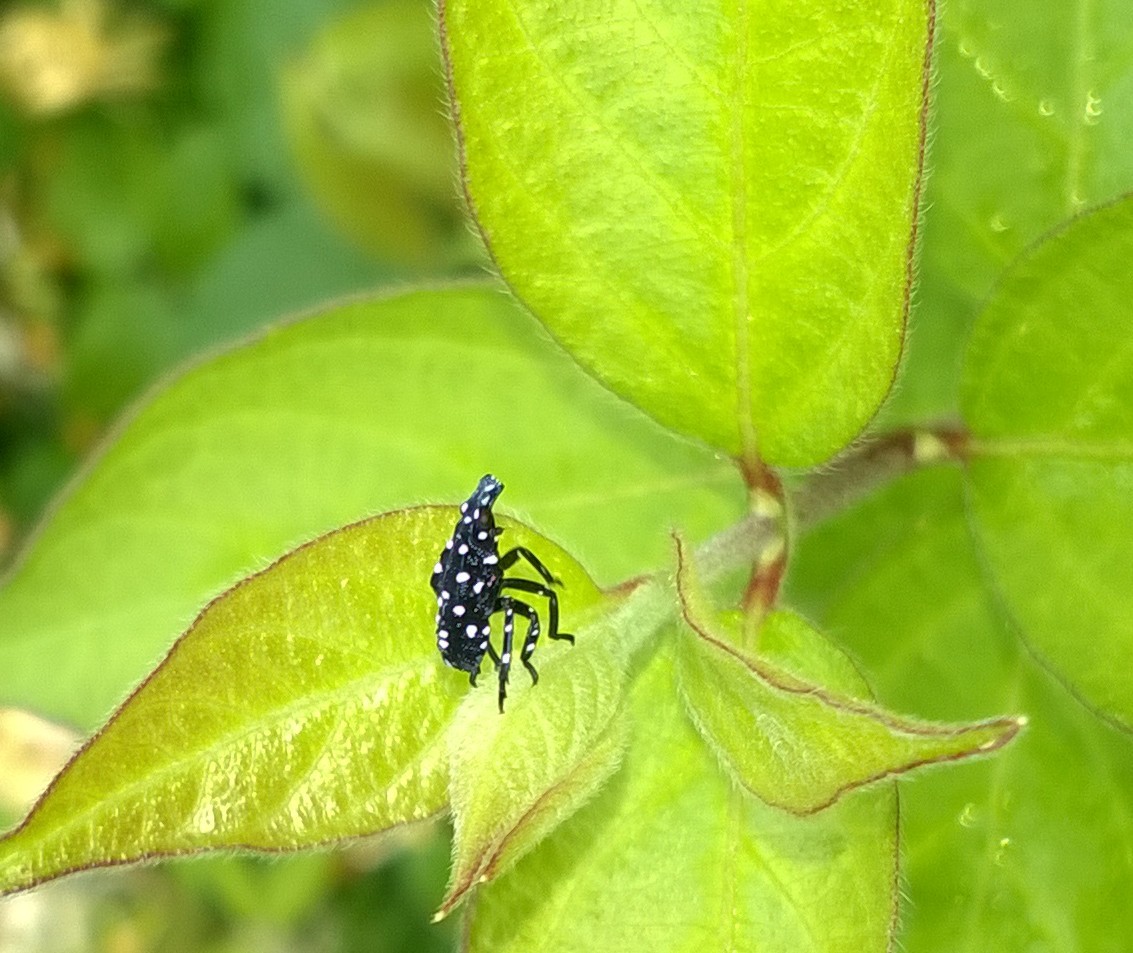 The insect:  The spotted lanternfly (SLF) originates from China where its presence has been documented in detail dating as far back as the 12th century. In modern times, it was first recorded from a sample collected in Nankin, China. SLF is native to China, India, Japan, Korea, and Vietnam. There is one generation per year.  The eggs overwinter, with nymphs appearing in late April or early May (May 9 in 2018, April 27 in 2019, April 22 in 2020, April 28 in 2021).  The first three nymphal instars are black with white spots.  The fourth and final instar becomes bright red, with white and black markings. Adults appear in mid-July (First emergence for 2021 reported on July 9). These adults have grey front wings with black spots, with an area containing small black rectangles near the wing tip.  Bright red markings on the hind wings are exposed during flight.  Nymphs and adults form feeding aggregations, feeding on phloem sap, and excreting large amounts of honeydew, which coats plants and other surfaces, supporting the growth of black sooty mold.  The nymphal host range is extensive, with more than 70 plant species, in multiple families.  In the fall, adults return to tree of heaven, where they sequester indole alkaloids that confer protection against predators.  In 2018, courtship behavior was seen on Sep 12, with first eggs detected on Sep 17.
In 2019, first eggs in Virginia were seen on Sep 12.  Mating pairs may occasionally be found on the tree. 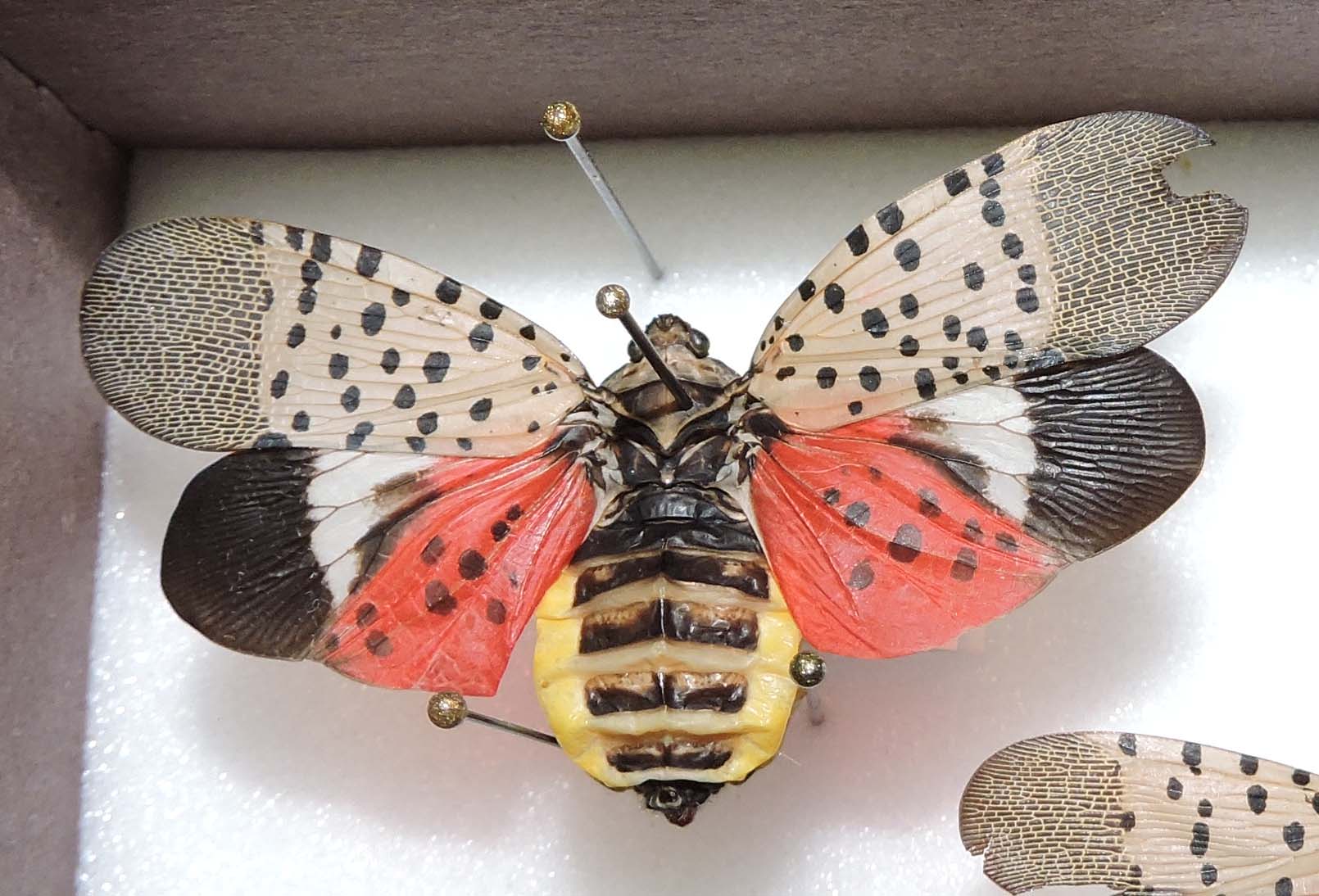 Spread to US and Virginia:  In September 2014, the first detection of SLF in the US was confirmed in eastern Pennsylvania. In 2017, the range expanded to 13 Pennsylvania counties and a single county in both Delaware and New York. Live adults were found in Albany, and the Finger Lakes region of New York in September 2018.  SLF is now established in 13 counties of New Jersey.  Egg masses and dead adults were found in Winchester in January 2018, reflecting population development in 2017.  During the 2018 season, the infestation zone in Virginia expanded from approximately 1 square mile block in Winchester, Frederick County, to about 18 square miles, and 40 square miles in fall of 2019.  By the end of the 2020 season,  the zone encompassed 140 square miles.  Scattered populations are established in Clarke County, with single specimens found in Albemarle, Augusta, Fauquier, Madison, Page, Prince William, Rockingham, Shenandoah and Warren counties, plus the City of Lynchurg.  Click here for a map of the current Virginia distribution.

An eradication effort is underway. The species is now established in much of Maryland, and in November of 2019 was found in Clark County VA and Berkeley County WV. SLF is likely to have arrived from China up to two years earlier than first detected on shipping materials, pointing to its ability to overwinter successfully. It is highly invasive and can spread rapidly when introduced to new areas. This is attributed to its wide host range (more than 70 host plant species), a lack of natural native enemies, and its ability to hitchhike in human conveyances.

Pest status:  This insect poses a threat to commercial vineyards, orchards, hop yards and even forest systems. Grape is the most vulnerable commercial crop; a factsheet for SLF management in vineyards is available.  Severe damage to fruit crops, hops and some vegetables have been reported in Pennsylvania.  Because of huge populations that can develop, and its habit of producing large amounts of honeydew and resulting sooty mold growth, it becomes a severe nuisance pest in residential areas.  A factsheet for SLF management in residential areas has been posted.

Quarantine established for Virginia:  On May 28, 2019, the Virginia Department of Agriculture and Consumer Services (VDACS) announced the establishment of a quarantine to limit the spread of SLF.  The press release on the SLF quarantine linked here.  A direct link to the quarantine document is linked here as well.  Some of the key provision of the quarantine are:

The training needed to obtain a SLF permit is available online.  There is a $6.00 fee.  After an individual applies to take the course, it may take up to 10 hours to be formally enrolled.  Once the course is completed, it may take up to two weeks to receive the certificate.  In practice, both of these intervals are often much shorter.

Are control actions needed?  There is currently an eradication (or at least slow the spread) program underway in the infestation zone. This consists of destruction of egg masses where possible, removal of tree of heaven by cutting combined with herbicide treatment (cutting alone will result in proliferation of tree since they will sprout from roots), and treatment of remaining larger trees with dinotefuran.  Pesticide application for SLF on individual farms are not recommended at this time, because of the limited spread.  Integrated Pest Management calls for the use of multiple control tactics to suppress a pest.  Unfortunately, with this new invasive pest, much work needs to be done on control measures.

Chemical control:  Several insecticides are very effective. Repeated applications may be needed. There is risk to beneficial species and pollinators.
Biological control:  Several native generalist predators and parasitoids attack SLF, but not in adequate numbers to achieve control.  Natural enemies in the home range of SLF are being sought.
Cultural control: Removal of tree of heaven should be practiced, by cutting supplemented by herbicide treatment.  Leave a few larger trees, which are then treated with dinotefuran. When adults return to TOH in late summer and fall, they are killed by the insecticide.

If spotted lanternfly is found:  Suspected finds in Virginia should be reported at:

In addition to reporting the find, landowners should destroy the infestation if possible.  Several insecticides are very effective.  If the population has become widespread, there will be a problem with continued immigration following initial control with insecticides; therefore repeated applications may be needed.  In preliminary trials in Pennsylvania, the following insecticides have been highly effective:

Updated recommendations for tree fruits and grape (Jan 2019) have been posted by researchers at Penn State University.