I. Introduction: Oriental fruit moth (OFM), introduced in the U.S. on nursery stock from Japan between 1913 and 1916, is a serious stone fruit pest in the mid-Atlantic area. This species can be found in various stages during the entire growing season, and is the main reason for season-long, repeated insecticide applications. This pest, together with codling moth,  has been causing the rejection of many truckloads of apples in the mid-Atlantic region in recent years.

II. Hosts: This insect infests all stones fruit plus apple and pear. Late ripening peach cultivars are particularly vulnerable to OFM. During its life cycle it may also utilize orchard trash, mummified fruits and weed hosts for cocoon sites.

III. Description: The adult (pictured above) is a small grayish, mottled moth about 1/4 inch (6-7 mm) long and with a wingspan of about 1/2 inch (10-15 mm). Its wings are held roof-like over its body. Eggs are flat, oval and whitish, and are laid singly on twigs or the undersides of leaves near growing terminals, or on water sprouts. Newly hatched larvae are 1/16 inch (1.5 mm) long and are cream colored with a black head. Older larvae have a brown head capsule, are slightly pink, and grow to about 4/10 inch (9-13 mm) long. Larvae have three pairs of true legs and four pairs of prolegs, located on the third, fourth, fifth, and sixth abdominal segments. An anal comb with five "teeth" on the last abdominal segment sets OFM larvae apart from some other larvae which may feed inside fruit. 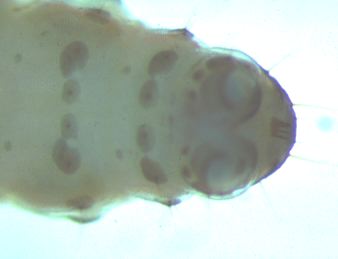 IV. Biology: Full grown larvae overwinter in cocoons in bark crevices, orchard trash, weeds, ground cover, and in fallen or mummified fruit. The larvae pupate in March, with the first adults found by the pink to early bloom stage of bud development, depending on variety. There are four to five generations per year in the mid-Atlantic region. In southern New Jersey, flight peaks can occur during the first week of May, mid-June, mid-July, and late August.

The adult female may lay up to 200 eggs in her lifetime. The eggs may take up to three weeks to hatch during cool spring weather, but need only three to four days during hot summer weather. After egg hatch, first and some second brood larvae bore into new growth stems, and exit one and a half to five weeks later, depending on the temperature. Larvae will tunnel up to 6 inches (15 cm) into the shoot, or they may exit and enter one or more new shoots before maturing. Larvae of later generations of OFM lay eggs directly on the fruit, where the larvae bore in and feed. Most summer cocoons are formed on the tree.

V. Injury: Infested shoots and terminal leaves wilt and bend over (left photo below). After larval emergence, the entire tip and its leaves dry up, and bend down even further (middle photo below). This injury is known as "flagging." Flagging injury stimulates lateral growth below the point of injury. This can inhibit good scaffold formation in young trees, and provides wound sites for pathogens. Crooked branches may also result from terminal feeding, but is usually of minor importance. Terminal tunneling may also appear in apple beginning in late May, and may be confused with early twig blight; the twig is hollowed and filled with frass, however.

Fruit injury (right photo below) is more critical than terminal flagging, and may occur either early in the season on young fruit, or later after pit hardening to final swell. Injury is rarely seen on young or green fruit in sprayed blocks, but may still be found at harvest. Larvae will usually enter the fruit from the stem end, and where two fruit touch each other on the tree. Later broods will enter anywhere on the fruit. Gum and frass may be exuded from the wound area as the larva bores into the fruit. As the gum ages, a sooty mold may form on it, turning the entire wound area black. Larvae may occasionally enter fruit through the inside of the stem, and therefore leave no wound area except for a small mark at the stem end of the picked fruit.

VI. Monitoring: Pheromone trapping: Prior to first adult emergence (pink to early bloom) pheromone traps such as Pherocon 1C or equivalent should be placed in the peach or nectarine orchard. Use at least two traps per orchard. Larger farms require more traps, so that each distinct area of the farm can be covered, and sources of migration identified. (Penn State photo of OFM in trap).

Temperature monitoring: Degree days (DD), base 45°F, must be recorded in order to predict proper insecticide timing. A max./min. thermometer, or other recording device, such as a pre-programmed degree day accumulator may be used. Degree day accumulation should start at the first sustained adult trap catch. This is used as the bio-fix point, and all accumulations are counted from this date. The first OFM spray should be applied after an accumulation of 75 DD (Intrepid) or 175 DD (all others) after biofix. A second application should be made after an additional 175 DD (10-18 days).  These 2 applications should control the entire first generation. Applications for second generation control should be timed at 850-950 DD (methoxyfenozide) or 1150-1200 DD (all others) after biofix of spring brood moths and then after an additional 300 DD (10-18 days). Third generation control should be initiated at 1800-1900 DD (Intrepid) or 2100-2200 (all others) and again after an additional 300 DD (10-18 days).  A treatment threshold of 6 to 8 moths per trap per week may be used for the fourth through fifth generations. Applications should be assumed to last 10 days to 2 weeks, depending on weathering. Additional sprays should be applied if any flagging or fruit damage is seen.

During mid- and late season, weekly examinations should be made of about 200 fruit in each block. As the season progresses, special attention should be paid to the stem ends of the fruit. Fruit is examined for fruit moth injury the same time it is examined for other insect or disease injury. After treatments are applied for the first OFM generation, a treatment threshold of 6 to 8 moths per trap per week may be used for the second through fifth generations. Applications should be assumed to last 10 days to 2 weeks, depending on weathering. Additional sprays should be applied if any flagging or fruit damage is seen.