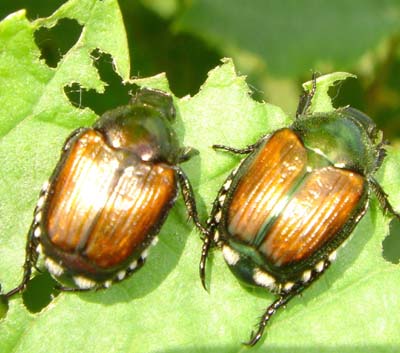 This familiar beetle may be a severe pest of grape during the summer, feeding mainly on foliage and rarely on berries. The large, white, C-shaped larvae overwinter several inches below the soil surface. In spring they move closer to the surface and feed on grass roots; larvae begin pupating in May. In late June (early June in eastern Virginia) adults emerge and begin feeding on a wide range of plants. Males emerge one or two days earlier than females. Adults are shiny green with copper-colored front wings. Beetles skeletonize leaves of some varieties, or eat completely through the leaves of other varieties. Although feeding on fruit of some crops, such as peach, grape berries are rarely attacked. Beetles are gregarious; they may be present in great numbers on a few vines. Feeding is concentrated in the upper part of the vine canopy. Peak adult activity is in July, but may continue into September. Eggs are laid in the soil, hatching in about two weeks. Females make several trips to the soil, laying 1-4 eggs each time. Young larvae feed on grass roots until cold weather when they descend deeper into the soil.

Apparently Japanese beetle is more abundant on grape in Virginia than in other eastern states. In Ohio it rarely necessitates control, and in both Pennsylvania and North Carolina it is more abundant in counties near Virginia. In Virginia there are large acreages of larval habitat (pasture) adjacent to preferred adult food (vineyards); this combination is favorable for Japanese beetle populations.

In a feeding study with Japanese beetle on the French hybrid `Seyval Blanc', in the upper Shenandoah Valley of Virginia, the natural infestation did not result in any significant loss in fruit quality, yield or vine growth, relative to the protected control vines, despite greater leaf area loss than in the control (6.5% versus 3% leaf area loss, respectively). Intensive feeding by Japanese beetle after veraison caused the most severe effects on fruit quality. These vines had 11% leaf area loss. This loss occurred in less than half the time relative to natural feeding, about 3 weeks compared with 6 weeks, respectively. Veraison marks the onset of the process of berry ripening; hence during the post-veraison period, the grape berries have become the sink for photosynthates. While mature vines can withstand some foliar feeding, greater care must be take to protect young vines, which may be totally defoliated.  Levels of defoliation are often difficult to estimate; see the figure for examples of differing levels of severity.

Japanese beetle larvae are subject to attack by a bacterium, Bacillus popillae (milky disease). This biological control agent can protect grassy areas from large larval populations, but it is ineffective against adults entering the vineyard. Adults are capable of flying great distances and will come into the vineyard from untreated areas. Insecticide applications will usually be necessary for control. Commercially available attractant traps are generally not adequate to protect vineyards but can be useful in monitoring population fluctuations.  Two species of tiphiid wasps have been introduced to control Japanese beetle.  Larvae are attacked in spring by an imported parasitic wasp, Tiphia vernalis (OARDC link).  In late summer, a related species, T. popilliavora attackes younger grubs. A tachinid fly, Istocheta aldrichi, parasitizes adult beetles.

The eggs and first instar larvae of Japanese beetle are poor at retaining water, consequently they are vulnerable to drought conditions.  A general requirement is for a total of 10 inches of rain over June, July and August.  Adult populations are commonly reduced in years following summers of inadequate rainfall.