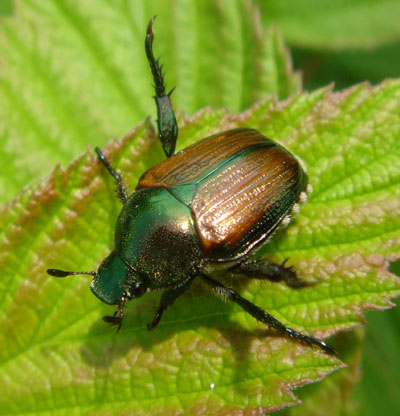 I. Introduction: Japanese beetles (JB) were introduced into New Jersey on nursery stock from Japan in 1913. They are now seasonal pests in many eastern fruit growing areas. Larvae feed on roots of grass, herbaceous plants and nursery stock, while adults feed on foliage and fruit.

III. Description: Adults are 3/8-1/2 inch (8-10 mm) long, metallic green to greenish bronze with coppery red wings and small white tufts on the sides and tip of the abdomen (see photo above). Larvae are "C"-shaped, cream-colored white grubs with brown heads and are 3/4 - 1 inch (20-25 mm) long when mature.

IV. Biology: Grubs overwinter 8-10 inches (20-25 cm) deep in the soil. As spring temperatures increase, the grubs move up in the soil to feed on grass and other small roots. They pupate in late May to June and adults start emerging in late June to mid-July. Adults which live from 30 to 45 days, feed through late summer or early fall. Females lay eggs 2-6 inches (5-15 cm) deep in the soil during July and August, and grubs hatch in 10 to 12 days. Grubs first feed on decaying matter but soon feed on roots as they move deeper to an overwintering site.  The eggs and first instar larvae of Japanese beetle are poor at retaining water, consequently they are vulnerable to drought conditions.  A general requirement is for a total of 10 inches of rain over June, July and August.  Adult populations are commonly reduced in years following summers of inadequate rainfall.

V. Injury: Adults are the principal injurious stage to caneberries. Adults skeletonize leaves, but fruit feeding is the most important injury to brambles. Adults are gregarious and often feed in groups chewing large chunks from the fruit. In the mid-Atlantic area most injury occurs during the last two weeks of July through the first week in August. Fruit is usually injured during the last two weeks before picking. Therefore injury is most common on varieties ripening during periods of JB abundance.

VI. Monitoring: Traps are available for JB and are somewhat effective for GJB, but are only effective for monitoring the initial adult emergence. Adults may be monitored by quietly moving into the treeaong the rows, jarring several branches, and observing how many fly off. Direct fruit counts are the most effective way of assessing damage. Fruit should be examined by the method outlined for other insects. Since feeding may be "clumped" or unevenly distributed, care should be taken in looking at a representative sample before making a spray decision.