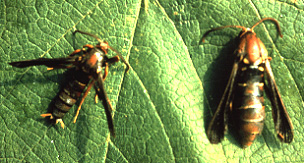 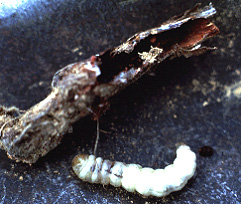 The grape root borer until recently  has not been a severe pest of Virginia grapevines. But, the past few years, it has become an important pest in some Virginia vineyards.  It has been a major pest in nearby grape-growing states (NC, WV, TN).  It is expected to become more prominent in the state. At least one vineyard was destroyed in 1983 due to grape root borer. In the winter of 2001-2002, several Virginia vineyards have detected considerable infestations, and more vineyards were found to be infested in 2003 and 2004.  Basically a southeastern species, grape root borer is near the northern edge of its economically important distribution in Virginia, although it may be a pest into several southeastern counties of Pennsylvania. Lower populations are present in more widely distributed states as well. Substantial research has been conducted on this pest in Georgia where it has severely affected muscadine grapes.

This species overwinters as larvae in two different stages of development. The life cycle takes two years to complete (some studies indicate a three-year cycle), and almost all of this is spent as larvae feeding on grape roots. They bore into the roots and crown below the soil surface, reducing the productivity of the vine. Roots may be hollowed and sometimes packed with frass.  Vines eventually die; there may also be increased susceptibility to cold injury. Young larvae are spread throughout the root zone while older larvae are found on larger roots close to the trunk. Ninety per cent of the pupae are within 35 cm of the trunk and the mean depth in the soil is 9-10 cm. A lack of plant vigor is usually the first sign of the presence of this pest. Another indication is the presence of cast pupal skins protruding from the soil near the base of the trunk in late July and August.

Full-grown larvae are about 25 mm long, white, and have brown heads. They leave the roots and pupate in cocoons near the soil surface beginning in June. Adults emerge 35-40 days later, beginning in about the first week of July, with greatest numbers present in the last two weeks of July (see flight data from a 2-year study of lure efficacy in 1986-1987). Moths are wasplike in appearance.  The body is generally brown. The top of the head has orange; antennae are orange with brown-black markings; the abdomen is dark brown with reddish-brown markings, with a very narrow yellow band on posterior edge of segments two, four, and sometimes on six. Legs are orange with brown-black markings. The forewings are dark and mostly opaque. The hind wing is more transparent (see photo above, and University of Kentucky link).  These moths are daytime fliers. After flying for several days, females begin ovipositing on grape foliage, canes, and weeds. Each female lays an average of 300 eggs. About two weeks after hatching, first instar larvae drop to the ground and tunnel to roots. The greatest natural mortality occurs at this point in the life cycle. Only 1.5-2.7% survive the first stage because of predation, parasitism, and desiccation; but, once established in roots, mortality is very low. Infested vines are usually encountered randomly across a vineyard. Larvae do not travel very far in the soil, usually remaining on the roots of a single vine.

Control of this pest may be difficult (especially in established populations), and severity has been increasing in Virginia vineyards. There is currently a single insecticide registered, Lorsban 4E, which has a very preharvest interval, complicating timing.   Entomopathogenic nematodes have been effective in lab and greenhouse, but field results are variable.  Effectiveness is affected be environmental variables such as soil moisture.  Contact insecticides are ineffective against subterranean larvae, although soil injection of fumigants shows promise. Some soil barrier treatments have recently been shown to be effective. An effective cultural control method involves mounding soil beneath vines after borers have pupated, and then leveling the ridges in the fall or spring. When adults leave the cocoons they are unable to dig to the surface. Timing is important because if mounding is done too early the larvae merely tunnel up into the ridge before pupating.  This approach is labor intensive, especially since mounds must be pulled down again in the fall.  Proper weed control appears to be important in borer management because of increased larval mortality at the exposed soil surface. When vines are infested, nitrogen fertilization may help overcome effects of damage.  An action threshold suggested by University of Kentucky is 5% of the vines having pupal skins present.

A mating disruption product, Isomate GRB, is now registered.  The label is available (Great Lakes IPM), as is the Safety Data Sheet (SDS) (Pacific Biocontrol).  The rope-style pheromone dispensers should be placed in the last week of June, at a rate of 100 ropes per acre.

The pheromone blend used is (E,Z)-2,13-octadecadienyl acetate (ODDA) and (Z,Z)-3,13-ODDA (99:1).  Traps are available from Great Lakes IPM. Traps should be placed in the third week of June.  Because traps will attract male moths from outside the vineyard, numbers do not necessarily correlate with root infestations.  Traps for some clearwing moths are not very specific, and are likely to catch many nontarget related species. This is less of a problem with grape root borer traps, however a few nontarget species may show up.  One is the squash vine borer.  It can be easily differentiated from GRB by the heavy bands of red-orange on the abdomen, heavy red on the legs, and green coloring on the wings; this moth is heavy bodied and quite fuzzy.  See the linked images of squash vine borer from University of Kentucky.  Any clearwing moth with broad yellow or white bands on each segment, or a black body, or clear forewings is not grape root borer.