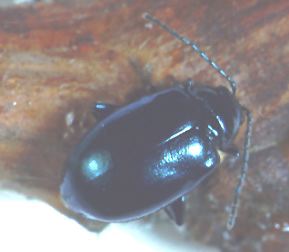 This is a metallic blue-green beetle that is almost 5 mm long. Adults overwinter in debris in and near the vineyard. They become active early in the spring and lay eggs in cracks in the bark, at bases of buds, between bud scales, and on leaves. Eggs are light yellow and are laid in masses; they hatch in a few days and larvae feed on grape leaves for 3-4 weeks. Larvae are brown with black spots, and reach a length of 10 mm (image shared by H. Hogmire). Larval feeding damage consists of characteristic chain-like feeding marks on leaves, although occasionally this injury may appear more extensive (image shared by H. Hogmire). However, the damage by adult grape flea beetles is more important. The beetles eat holes into the sides of buds and gouge out the contents as the buds swell. Such injury occurs most prominently on thick-leaved grapes which have large buds, such as the American cultivars `Concord' and `Niagara'. It should be noted that climbing cutworms can cause similar damage. However, damage by the latter pest complex is usually more ragged in appearance. Adults also feed on the unfolding leaves. 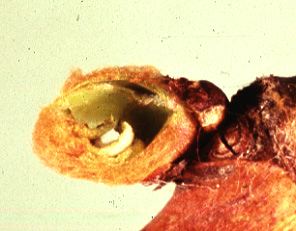 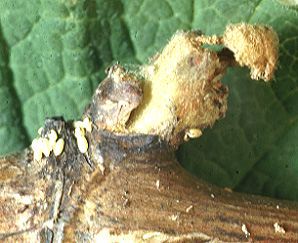 When larvae are mature they drop to the ground and pupate in an earthen chamber. Adults emerge 1-2 weeks later, in July and August. These adults feed for the rest of the summer but cause little damage. The injury consists of small patches eaten out of leaves.  In the fall they seek protected places in which to overwinter. In addition to wild and cultivated grape varieties, grape flea beetles feed on Virginia creeper.

The grape flea beetle is more common in neglected vineyards, but some Virginia commercial growers consider this species their main insect pest.  Sprays and fall vineyard cleanup for grape berry moth aid in controlling flea beetles, but sprays may need to be directed against this pest early in the season. This pest may escape proper identification because of its injury being mistaken for that caused by climbing cutworms. Injury be the latter is more likely to be ragged in appearance, though there is overlap in appearance. Proper identification is increasingly important as we depart from the use of broad spectrum organophosphates; control provided by many new tools may not be as effective for Coleoptera as for Lepidoptera.