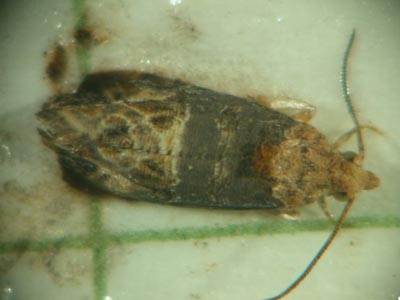 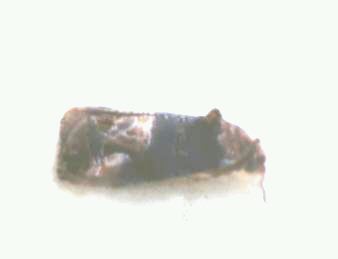 The grape berry moth has been considered one of the most severe grape pests in Virginia. Populations have been worsening in many vineyards in recent years. Economic damage is primarily to the berries, although minor damage is also done to foliage. This species overwinters as pupae in grayish silken cocoons in fallen leaves. It is more common in damp material. Adults are moths with irregular markings of different shades of brown. While earlier workers reported that adults emerge when grape foliage is well unfolded, near bloom time, beginning in late May or early June, more recent work has shown a prebloom generation as well, with mature larvae present by bloom. The second generation, therefore flies near bloom time, continuing for several weeks. The female sex pheromone was recently defined by Witzgall et al. (2000) as a blend of (Z)-9-dodecenyl acetate and (Z)-11-tetradecenyl acetate. Females lay an average of 20 eggs singly on grape stems, blossom clusters, or berries at dusk. The eggs hatch after about 4-8 days. 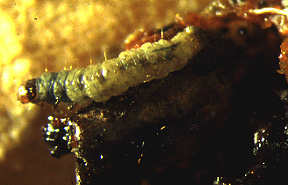 The larvae are creamy in color at first, turning green or gray-green and eventually nearly purple when mature, nearly 10 mm long. The first-generation larvae feed on blossoms or small berries. They leave silken strands where they have crawled, resulting in webbed clusters. One larva may injure several berries. Initially larvae feed externally on the small berry, but when fruit are 6-8 mm in diameter, larvae begin to enter and feed internally, making a small hole about a mm in diameter. Soon after larvae enter berries, winding dark tunnels are evident through the surface of the berry. After feeding for 3-4 weeks, each larva makes a semicircular cut in a leaf, folding and tying the flap around itself. The pupal stage is passed in mid to late July at this site. Adults emerge after 10-14 days, peaking in mid-August.

Third and fourth-generation eggs are laid from late July into September on berries. A red spot develops at the point of entry of the larva (Plate 10). Larvae tunnel into the fruit, where they feed on pulp and seeds. This causes fruit to shrivel and fall, and may lead to loss of most of the crop. Berries may be webbed together and sticky with juice. Larvae of this generation are more numerous than in the first generation. These larvae drop to the ground where they pupate and overwinter in leaves under the trellis. Two generations annually have been recorded in Ohio and three in Ontario. Pennsylvania sites only 16 km apart have been shown to vary in the number of generations. Work in Virginia indicates three to four generations, with a possible fifth in some seasons. Populations of grape berry moth may be monitored with a commercially available pheromone trap. A non-economic species feeding on sumac, Episimus argutanus, is also attracted to GBM pheromone traps, and may outnumber grape berry moth in the traps.  Furthermore, there is some overlap in the pheromone blend of grape berry moth and redbanded leafroller, an occasional grape pest; consequently, a redbanded leafroller moth may occasionally turn up in a grape berry moth trap.  In the linked photo, GBM is on the left, RBL is on the right.  The relationship between trap captures and fruit damage is strongly influenced by vineyard surroundings. In vineyards surrounded by open terrain (cornfield or pasture, etc.), trap numbers may be high but actual injury low. In vineyards surrounded by woodland (with wild grapevines), trap captures may be low, but accompanied by high levels of injury. In a Mihigan study, pheromone traps were placed at varying heights up to 30 ft.; GBM trap captures increased with height.  Prediction of egg deposition using degree day models has been difficult.

A model developed for northern states used degree days after bud break of a wild grape species to time sprays.  The grape species used in that model are not common in Virginia, consequently a different approach is used.  GBM pheromone traps are placed at a wooded edge near the vineyard, and monitored daily for biofix (first sustained capture of adults).  Sprays may be timed toward peach catch for the generations: Spring generation 145 DD above a base of 50 degrees F, 1st generation 720 DD, and second generation 1900 DD.

Recent research in Pennsylvania has centered on the initiation and termination of diapause. Diapause termination: The first adults appear in the spring at 266 degree-days above a threshold of 47degrees F (Celsius: 148 DD above 8.4 degrees C) (Tobin et al. 2002). Development of a complete generation requires 900 DD (Celsius: 500 DD). This can be divided into 763 for development from egg to adult, and 133 for mating and preovipositional behavior (Celsius: 424 and 74 DD, respectively) (Tobin et al. 2001). However, emergence is variable in this species. Tobin et al. (2002) found that after cold exposure, adults emerged 20-26 days after a return to warm temperature. But if pupae were not exposed to cold, individuals emerged within a month before or after the cold-treated insects. Therefore, in springs following mild winters, it may be difficult to accurately predict adult emergence.

Other recent Pennsylvania research has shown that the induction of diapause is determined by decreasing daylength when individuals are in the egg stage.  For example at 15 hours photophase at oviposition, 0% of the individuals entered diapause, and hence the resulting adults would produce a further generation.  At 14 hours 44 minutes, 25% entered diapause; at 14 h 30 min, 80% entered diapause, and at 14 h, 99% entered diapause.  Control directed at larvae that will not enter diapause may contribute significantly to prevention of a late generation, close to harvest.  Fifteen h occurred on 12 July in Pennsylvania.  This must be determined at various latitudes. Since the longest daylength at 38N (Charlottesville) is 14 h 48 min on June 21 (solstice), verification of these models is desirable. Critical photophase values associated with given proportions of the population entering diapause are probably shifted accordingly.  A daylength calculator is available on the web, as is a table with approximate daylength values (note that northern latitudes are presented after southern latitudes).

More selective insecticides are now available for grape berry moth control, such as Intrepid 2F, Entrust SC, Delegate WG and Altacor 35WDG. Researchers in Arkansas have recommended spraying at 450-700 degree-days above a base of 50 degrees F after first male captures (biofix), and from 1250-1700 DD, and every 10 days from 2250 into September.

If this pest has been troublesome, leaves may be raked and burned in the fall. The soil beneath rows may be cultivated to bury overwintering pupae. Soil from row centers should be piled beneath vines about a month before harvest. In the spring, about two weeks or more before bloom, this ridge is pulled back into the row center and disked or plowed. An egg parasite, Trichogramma minutum Riley, provides some biological control. However, grape berry moth does not appear to be an optimal host, and resulting adults have poor vigor and exhibit developmental abnormalities (Nagarkatti et al. 2002).  Inundative release of insectary-produced Trichogramma may be a solution.

Until recently, this species was known generally as Endopiza viteana Clemens.  The genus has been changed to Paralobesia because Endopiza was regarded as a misspelling of Endopisa, a synonym of Grapholita (Isaacs pers. comm.).