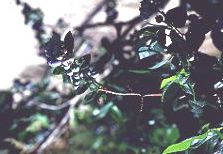 Biology: Complex: Meyer (1986) described these as "... small brown moths that emerge early in the spring and lay their eggs on young green berries. The larvae of both species feed inside the fruit and move from berry to berry as they grow. Cranberry fruitworm larvae produce masses of brown frass and silken webbing as they feed in a berry cluster, while cherry fruitworm larvae bore directly from one fruit to another and seal the junction with a lining of silk. Both species are similar in size an shape, but cherry fruitworm larvae are more reddish in color. "Fruitworm infestations may be to difficult to detect early in the season because there is little external evidence of the insect's presence. Look for a pin-sized entry hole near the stem of any small, shrunken berries that have turned blue, and then open adjacent berries to find the larva. The distinctive frass and webbing produced by the cranberry fruitworm does not usually appear until the larvae are several weeks old and begin moving between berries."

Milholland & Meyer (1984) discussed the species separately. Cranberry fruitworm is found throughout the eastern U.S. and Canada. This species can be an important pest, found wherever blueberries are grown (Marucci 1966). Host plants include cranberry, huckleberry and wild and cultivated blueberies. Fully grown larvae overwinter in silken hibernacula near the soil surface. In late winter, they pupate and emerge about a month later as small brownish-grey moths with a 16-18 mm wingspan. In North Carolina, emergence is from late March through most of April. It is a common species but nocturnal. After mating, females oviposit within the calyx cup of green berries. A photograph of cranberry fruitworm eggs is provided in a factsheet from Michigan State University.  First instar larvae emerge in 4-5 days and burrow into berries near the junction with the stem. The larva is a smooth, elongate caterpillar, 15 mm long, usually pale yellowish green with amber head capsule. Larvae feed in berries until most contents are consumed. The berry shrivels and turns prematurely blue. Larvae move from one berry to another, injuring 3-6 berries. The larvae web together infested and uninfested berries, which are unsuitable for harvest. Recent work (Godin et al. 2002) has shown five larval instars, despite early reports of six.  There is often frass around the injured berries, unlike the cherry fruitworm (see North Carolina photo). Most larvae are grown by the end of May. Larvae drop to the ground and build a silken chamber. It is usually univoltine, but a few produce a second generation on deerberry, Vaccinium stamineum L.

Cherry fruitworm is distributed in the northern 2/3 of U.S., also feeding on apple, cherry, rose and hawthorn (Milholland & Meyer 1984). Cherry fruitworm rose to major pest status from 1945-1950 (Marucci 1966). Larvae resemble cranberry fruitworms, but are more reddish in color. Larvae reach about 9 mm. Adults are small dark grey moths with chocolate colored markings on wings. Wingspan is 8-11 mm, seldom seen, nocturnal. Adults emerge in April, oviposit on fruit and foliage of blueberry. Larvae hatch in mid-April in North Carolina (Marucci 1966 said eggs not laid until after mid-May in New Jersey), bore into first fruit encountered, often entering the calyx cup. When larvae are half grown, they move into an adjacent berry at the point of contact, lining junction with silk. Some reach full size in this fruit, others enter additional fruit. Larvae leave fruit, enter a dead cane, pruning stub, or dead weed, remaining there for the rest of season, and overwinter; pupate in spring, adults emerge about 2 weeks later.

Control: For control for this complex, Meyer (1986) recommended a petal fall spray of Sevin. Milholland & Meyer (1984) recommended two applications, shortly after bloom and second 10-14 days later. Marucci (1966) also recommended two applications because of prolonged activity of cherry fruitworm. Meyer (1986) stated that the petal fall spray is the most important for blueberry, controlling plum curculio, cranberry and cherry fruitworms, and the first generation of sharpnosed leafhoppers.

Murray et al. (1996) reported a complex of 17 parasites attacking cranberry fgruirttworm in Michigan, including some new associations. This most common larval parasitoid was Campoletis patsuiketorum (Hymenoptera: Ichneumonidae); the most common parasitoid recovered from fruitworm hibernacula was Villa lateralis (Diptera: Bombyliidae).