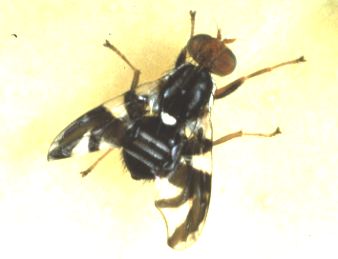 Blueberry maggot, Rhagoletis mendax Curran
I. Introduction: Blueberry maggot was formerly considered a race of apple maggot, R. pomonella (Marucci 1966), now considered one of the pomonella species group within the genus Rhagoletis: pomonella, mendax, zephyria, and cornivora. In some areas it is the most important preharvest pest. It has been common in Canada in lowbush blueberries, but since 1960's has spread southward through most of mid-Atlantic states (Milholland & Meyer 1984). Blueberry maggot was found to be common in the southeastern U.S. by Payne & Berlocher (1995), where an important host is deerberry, Vaccinium stamineum L. In addition to highbush blueberry, Vaccinium corymbosum L., and lowbush blueberry, the insect will infest huckleberry, Gaylussacia baccata. To date it has not been reported as important in Virginia, but this may result from unidentified infestations. See the NCSU photo of adult on blueberry, and USDA photo of larva in fruit.

II. Biology: Adults are mainly black with some white markings. The female is 4.75 mm (3/16 in) long, with a wingspan of 8 mm (1/3 in). The abdomen of the female has four white bands, in contrast with the three found on the male. The thorax is black with a white, backward-projecting section on the rear. Pupae overwinter in the soil at a depth of 2.5-15 cm (Milholland & Meyer 1984). Development is resumed in spring. Adults emerge shortly before harvest, usually last week of May or first week of June in North Carolina, peaking in mid-June (Milholland & Meyer 1984). The low temperature development threshold for the linear model was estimated at 4.7 deg C, and the heat accumulation required for median emergence was 934.3 day-degrees (Teixeira & Polavarapu 2001b). About 85% of the adults emerge the following year; some remain in the soil to emerge the following year, with a few emerging in the third and fourth years. However, Payne & Berlocher (1995) reported it to be more strictly univoltine than apple maggot. After a 7-10 day pre-oviposition period, females start ovipositing on large ripening berries. Larvae hatch in about 5 days, feeding in the pulp of fruit for about 2 weeks. Larvae then leave berries, and enter the soil to pupate.

"The highest populations... are generally associated with fields where soil moisture remains high enough throughout the summer (due to irrigation, high organic matter, or tall bushes that shade the ground) to prevent desiccation of the pupae. Pest populations also tend to increase following years when wet field conditions delay harvest and a cold winter breaks pupal diapause." (Milholland & Meyer 1984). 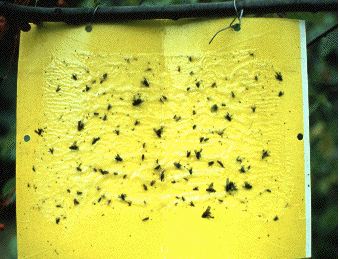 III. Monitoring: Use sticky yellow traps with protein hydrolysate or ammonium acetate bait, at a placement rate of 2-4 traps per acre. Use of an action threshold of 3 adults per week (or 5 adults per field per week) gives lead time for control (Meyer 1986). Traps should be placed in the upper half of the canopy, halfway between the center and edge of the plant, with leaves and fruit cleared from about 8 inches of the trap. Gaul et al. (1995) reported on deployment of traps for R. mendax. The first captures were before the first blue-colored berry in 39 fields over 4 years. Seasonal captures were 1.8-fold higher when traps were protected from the wind, 1.7-fold higher when berries were < 3 m from the trap (compared with > 3 m), 4-fold higher in fields with berries compared with vegetative fields, and 3-fold higher when placed in sheltered locations. Captures were 6-fold higher in weedy sites relative to weed-free sites. Since female only oviposti in ripening berries, traps captures when fruit are still green are less critical, but still serve to inform the grower on the size of the invading population.

Liburd et al. (1998) found sphere traps of varying color to be as effective as yellow panel traps. Ammonia baits increased effectiveness of traps, especially for females. Liburd et al. (2000) examined the placement of green sphere traps and yellow panel traps for blueberry maggot. Traps were best placed within the bush canopy, about 15 cm from the top of the bush. Sphere traps of 9 cm diameter were more attractive than 3.6 or 15.6 cm spheres. These green sphere traps has a more effective life span than did yellow panel traps.  Workers in Massachusetts have also used red sticky spheres for blueberry maggot adults.  Teixeira & Polavarapu (2001a) evaluated placement of both green and red spheres, and found both effective.  In smaller bushes, there was no difference in trap captures when placed in the top or bottom of canopy; more flies were captured in traps placed in the tops than bottoms of taller bushes.  See the NCSU photo of wing banding patterns of various flies captured on traps. There is a fruit fly that develops in black walnut that closely resembles blueberry maggot and may appear in traps since black walnut commonly occurs in the mid-Atlantic region. The apical black stripe reaches the edge of the wing, unlike blueberry maggot which has a clear space at the wing edge.

Workers in North Carolina have developed a method of determining risk of blueberry maggot infestation, based on plant size and spacing. According to this method, bushes under 3.5 feet have 0% chance of infestation. Obviously, this needs to be adjusted regionally to account for plant growth differences, since blueberry maggot is also a pest in lowbush plantings in Maine.

IV. Control: Chemical control: Several pesticides are effective, including malathion, or Sevin (Meyer 1986). A short residue pesticide like spinosad (SpinTor or Entrust) may be required because of proximity to harvest. Imidan 50W (2 lb/A) is also effective. Get adequate coverage of the lower half of bushes. If ripe berries are already present, harvest before spray is applied. "Once a field reaches its treatment threshold, continue insecticide applications every 7-10 days until all unharvested fruit has dropped." (Meyer 1986). Trap captures of adults within 5 days after a pesticide application reliably predicted continued BM pressure in 20 fields with low (0-5) through high (> 20) prespray captures monitored for 2 years. There is great potential for the use of pesticide-treated spheres to control blueberry maggot (Liburd et al. 1999, Ayyappath et al. 2000, Stelinski & Liburd 2001).

Biological control: Marucci (1966) listed two braconids in eastern U.S.: Opius melleus Gahan, Opius ferrugineus Gahan. These attack larvae; in New Jersey 10-40% of maggots may be destroyed. But apparently this is not an important factor since wild berries are always heavily infested even during years of high parasitism.