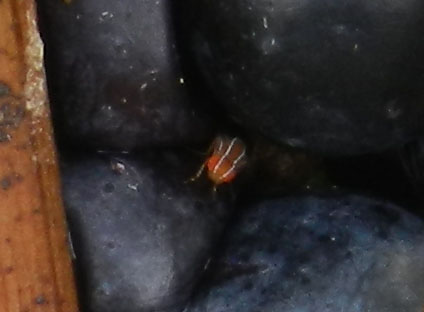 I. Introduction:  In September 2012, an additional exotic drosophilid was found to be common in some vineyard blocks.  The African fig fly (AFF), Zaprionus indianus, is originally from Africa but in recent years has been expanding its range.  It has moved west to Brazil, and east to India.  After an apparently separate New World introduction, it was found in Florida in 2005 and South Carolina in 2007.  When present, concurrent infestation with SWD generally existed.  However in one block, Zaprionus was far more common than SWD.  African fig fly cannot successfully oviposit in intact grape berries; it lacks the cutting ovipositor of SWD.  However, it can enter through oviposition sites made by SWD, and outcompete the SWD within the berry.  AFF can also successfully attack intact strawberries and raspberries.  It has been reported to attack intact figs while still on the plant.  Most hosts are attacked when already injured or on the ground.  African fig fly is easily collected at vineyard pomace piles.  See the distribution map for Virginia linked here.  An updated map of the US distribution is posted.

II. Hosts: This fly is capable of developing in multiple crops, but may not be able to penetrate uninjured fruit as does spotted wing drosophila.  However, AFFy may outnumber SWD when adults emerge from grapes.

III. Description:  This fly is brown in color, with longitudinal white body stripes, thinly bordered by black.  See adult flies in dorsal and oblique view.  The eggs bear resiratory horns, as do other drosophilid eggs.  However, a genus characteristic of Zaprionus is that the egg has four respiratory horns.

IV. Biology:  This species apparently cannot overwinter in Virginia and must recolonize the state from more southern regions each year.  Aspects of its biology in Virginia are still under investigation. In these video clips made by Jamie Wahls (Dept of Entomology, Virginia Tech), an adult can be see forcing its way out of the puparium (note the ptinilum (front part of the face) expanded to force open the puparium), and once emerged, expanding its wings.

V. Injury: African fig fly develops in a variety of fruits, introducing Candida yeast, which acts to speed breakdown of the fruit.  In Brazil, there have been economic infestations in fig, persimmon and a local fruiting tree species, Solanum lycocarpum.

VI. Monitoring: Monitoring methods are under investigation.  While adults appear in apple cider vinegar traps placed for SWD, these may not be the most effective means of sampling for FFF.  Some earlier publications use fermenting banana baits.

VII. Control:  Controls, if needed, will probably be similar to those developed for SWD.